Voters want to stay in EU even with hard border, poll shows 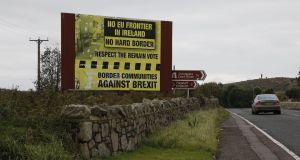 Support for remaining in the EU was consistent across all demographics and geographic areas, and was highest in Dublin, among older voters and the better off. Photograph: Nick Bradshaw

Just one in 10 voters believe Ireland would be better off leaving the European Union if Brexit resulted in a hard border between North and South, the latest Irish Times/Ipsos MRBI poll finds.

Support for remaining in the EU was consistent across all demographics and geographic areas, and was highest in Dublin, among older voters and the better off. Among the political parties, pro-EU feeling was least strong amongst Sinn Féin voters, though even here two-thirds of the party’s supporters (67 per cent) said Ireland would be better off remaining in the EU even with a hard border.

The British government has promised it will ensure there is no hard border after the UK leaves the EU. However, with the UK committed to leaving the single market and the customs union, EU figures have questioned how an open border can be maintained in Ireland.

Speaking in Davos this week, Taoiseach Leo Varadkar said it was up to the UK to “square the circle” of avoiding a hard border in Ireland and pursuing global free trade deals outside the single market and customs union.

The question of an Irish exit from the EU is to be discussed at a conference in Dublin next weekend, at which Nigel Farage, the former leader of the United Kingdom Independence Party and one of the architects of Brexit, is scheduled to speak.

The poll was conducted on Monday and Tuesday of this week among a representative sample of 1,200 voters aged 18 and over in face-to-face interviews at 120 sampling points in all constituencies. The margin of error is plus or minus 2.8 per cent.