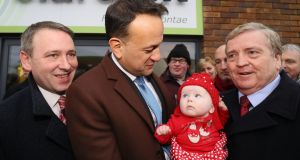 Leo Varadkar has predicted “real difficulty” in forming government after the election.

“If the polls are correct, then I think we are going to have real difficulty forming a government,” he told Clare FM.

He was speaking in Ennis as parties make their final pitches to voters as the final day of the campaign is under way ahead of polls opening on Saturday morning.

The election “three horse race” has taken everyone by surprise. “No election is easy. It has turned into is a three horse race - Fianna Fáil, Fine Gael and Sinn Féin - which I think nobody would have anticipated at the start of this campaign, that it would be a three horse race, but it is,” Mr Varadkar said.

“My fear is that a Fianna Fáil-led government or a Sinn Féin-led government - or the two of them in bed together. That could set us backwards, so people have a big decision to make.”

Asked about predictions that Fine Gael is on course to lose 15 seats, Mr Varadkar stated: “Those predictions are going to be wrong.”

“Any opinion polls that were taken were taken before the leaders’ TV debate on Tuesday which I think I did well in and before some of the controversies involving Sinn Féin that became major news.”

“I’m not going to attach any seriousness to anonymous comments from senior party sources. Anyone who has something to say they say it publicly quite frankly, so I’m not giving that any credence whatsoever.”

Mr Varadkar also said he would fight to retain leadership of Fine Gael in the event of his party losing the general election. Under party rules he would have to submit himself to a confidence vote.

“If that were to happen, I would ask to stay on as party leader and lead the Opposition, and be ready to pick up the pieces in five years time after Fianna Fáil do to the country what they usually do,” he said.

On health, Mr Varadkar said he “deeply regrets” that anyone has to spend any time on a hospital trolley.

“In a wealthy country like Ireland no-one should have to experience that, certainly their relatives should not have to either, and I know what it is like for the staff too.” But he said it is not true to say nothing was happening to fix the problems.

The housing crisis has come up “in so many different way” during the election campaign, he accepted, saying issues ranged “from people who are paying rents that are far too high, to people in their thirties living at home who are trying to buy their first home, struggling to get a deposit, to the really sharp end of things which is families in emergency accommodation.”

“But I actually, genuinely think we are making progress on this,” he said. Mr Varadkar said more houses are being built, house prices are levelling off, rents are going down and the number in emergency accommodation is falling back.

Promises from other parties to double housing within a year “is not honest”, he added.

Mr Varadkar said:“I think a vote for Fianna Fáil is a vote for Sinn Féin in this election.”

“There is a lot of people now in Fianna Fáil- candidates all over the country - who have indicated in the past couple of weeks that they are open to coalition with Sinn Féin.”

In Cork, Micheál Martin has insisted that Fianna Fáil is the only party capable of offering an alternative government to the current Fine Gael led administration.

Mr Martin told reporters that any negotiations with like-minded parties will be based on policy. He has ruled out going into coalition with either Sinn Féin or Fine Gael and acknowledged that he hopes to talk to parties such as the Greens, Labour and Social Democrats after the election on Saturday.

But when asked if he would advise Fianna Fail supporters to give their lower preferences to potential coalition partners in the Greens, Labour or Social Democrats, he declined to do so.

“I am never that prescriptive in terms of what people do with their preferences - no, I am saying to people that we obviously want to maximise our seats and to obviously vote Fianna Fáil,” he said.

“People should vote in order of their choice after that but in terms of the formation of Government I think people are hearing what I am saying but I don’t ever get into a position where I direct people (how to transfer).”

“I think they (Greens, Labour and Social Democrats) will do much better than people are expecting ... part of the narrative of the last week perhaps has been trying to write them out of the equation which may not materialise.

“I think they will do reasonably well,” said Mr Martin during a canvass on Trinity Bridge in Cork city centre which he found himself sharing with Fine Gael’s Jerry Buttimer as they sought to catch people going to work.

Mr Martin said that, beyond the Greens, Labour and Social Democrats, the issue of support from “like-minded independents” such as the Healy-Raes or Mattie McGrath would be strictly policy based.

Mr Martin refused to be drawn on how many seats Fianna Fáil might win but he said he was confident it would emerge from the contest as Ireland’s biggest political party.

“I have never given a specific number - but we had a very good day in 2016 coming from where we were. Obviously we want to increase our number of seats again.”

“Fianna Fáil has the realistic, do-able programme for a new Government - particularly in terms of urgent action on the health services and housing with the building of new council and affordable homes.”

“In terms of climate change, education and children with special needs, we have imaginative, innovative ideas and solutions to that as well.”

“All within sustainable financial parameter - and I think it is a do-able programme unlike others which are clearly not deliverable given the lack of any significant financial details in the programmes from other parties.”

Polling stations open at 7am and close at 10pm. The Department of Housing says voters do not need a polling card but will need to bring identification. The Irish Times will publish an exit poll as soon as voting ends on Saturday night to give the first indication of the outcome of general election 2020. The poll, carried out by the Irish Times’ pollsters Ipsos MRBI, has been commissioned jointly by The Irish Times, RTE, TG4 and UCD.