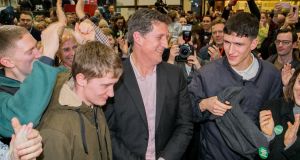 An incident during the election campaign when a homeless man was critically injured by Dublin’s Grand Canal played a huge role in determining voting intentions, according to newly elected Sinn Féin TD Chris Andrews.

Mr Andrews said the incident, in which the homeless man’s tent was lifted by an industrial vehicle, “horrified” people, particularly women voters in his constituency.

“It really crystallised people’s view of what was wrong with housing, with homelessness and with society in general, that feeling there is a division between the well-off, the elite, and people outside the pale, so to speak.”

He said people right across his socially diverse constituency of Dublin Bay South had voted for Sinn Féin because the party was going to “change things up a bit”.

“It was across the constituency. I got that in Ranelagh, in Rathmines, in Rathgar and Sandymount, particularly from mothers who have children with no prospect of getting out of their bedroom, two boys sharing a bedroom.”

He said many people felt “alienated and left behind”, many as a result of the conditions they are living in. People living in flat complex that were “just like tenements” had come out really strongly behind Sinn Féin.

Asked whether issues such as the Special Criminal Court or Paul Quinn’s murder had featured on the doorsteps, he said they had not. “They’re not issues that people raised with me. People are looking to the future.”

Sinn Féin now had to “do what we said and committed to”, he said, by talking to other left-wing parties.

Counting in the RDS resumed on Monday with count 8 which saw Andrews get over the line.

As expected, Green Party leader Eamon Ryan eased his way over the finishing line at the first count in Dublin Bay South. It wasn’t quite the political tsunami that might have seemed likely at the high-point of the party’s political fortunes last year.

Mr O’Callaghan said there was a “question-mark” as to whether the Irish political system can accommodate three large parties.

No political party has “a right to exist”, he said, speaking shortly before his election in the Dublin count centre at the RDS. “Parties die away – the Irish Parliamentary Party, gone; lots of other parties have gone and there is a question-mark as to whether the Irish political system can accommodate three large parties.”

“The issue was people really looked forward to the vision of change they want for the future and they didn’t see it coming from Fianna Fáil.”

Asked whether he had ambitions to lead Fianna Fáil, he said his ambition had been to be a justice minister for five years. In terms of the future, now Micheál Martin was the leader of the party. “I don’t know what is going to happen. Maybe I would but it depends on my personal circumstances at the time.”

He said he did not think it was credible for his party to “change our mind” on its stance against coalition with Sinn Féin. “That is what we campaigned on and it is not tenable for us now to say we see things differently and change our mind.”

In his constituency, the main issue that came up was housing. People in affluent areas complained about the cost of rent, and the inability of their children to be able to buy a house.

“Everywhere you went there were people in their thirties at home living with their parents for a while trying to save for a deposit. In the inner city there is a huge crisis in social housing.

“I met numerous people in the inner city, men in their mid-thirties who are living at home and have moved back in again with their parents. You would see the bag in the corner of the living room and the small bed that is rolled up in the day time and is then rolled out, where the son sleeps at night time.

“These are men who have children, who want to spend time with their children. That was the biggest issue.”

Ireland needs to be “rebalanced” to reduce the dominance of Dublin, he suggested.