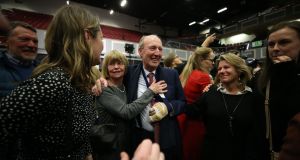 Ruth Buchanan and husband Shane Ross as he was eliminated from the count. Photograph Nick Bradshaw/The Irish Times

Green Party deputy leader Catherine Martin clearly had her Rathdown seat in the bag from the morning tallies, but while topping the poll, she was not elected until the fifth count.

In a splendid understatement Martin said it was “such an unusual election” and she couldn’t predict how many seats the party would secure.

“Overall there are a lot of seats that will come right down to the wire but this is the best result that we will have ever had as the Green Party,” she said.

“I remember becoming deputy leader in 2011 when we lost all our seats we are now in a position where we have 49 councillors and could triple or quadruple our TDs in Dail Eireann so for us it’s a good day and we are delighted and we say thank you to the electorate.”

Next behind her in this three-seater Fine Gael Senator Neale Richmond and Fine Gael Minister for Culture Josepha Madigan were neck and neck vying for the next seats from the first count. Although Fianna Fáil’s Shay Brennan, a councillor and son of the late minister Séamus Brennan looked like he was in with a shout, it was the two Fine Gaelers who took the last two seats, both elected without reaching the quota on the final count.

But the big upset in the Rathdown constituency was the loss of Transport Minister Shane Ross. Twice a poll topper and the first TD elected in 2016, Shane Ross lost his seat on the fifth count in Dublin Rathdown, the same count that saw Martin elected.

Ross said he didn’t attribute the result to his performance as Minister for Transport, but rather the “volatility” of the Rathdown electorate.

“It’s a very volatile constituency. Dublin Rathdown always has been and it’s always punished its poll toppers and I was a poll topper last time and the time before.”

However, he said he did not feel he had been punished by the electorate for entering into Government with Fine Gael.

“I don’t think I’ve been punished at all, I think what’s happened is that what the constituents have done is said we want to try something else we want a change from Fine Gael and the Independent Alliance and that is absolutely their entitlement and I accept it fully and I wish my successors a great deal of success.”

The alliance had been a “very responsible if radical” part of the Government he said.

“My colleagues and I certainly had an effect on the way government operated and we’re proud of that.”

Body of woman found in house in Killiney, south Dublin