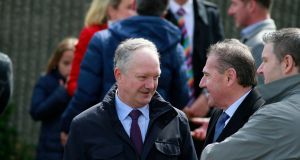 Cian O’Callaghan of the Social Democrats has taken the third seat in Dublin Bay North, the final count to be completed at the RDS.

Mr O’Callaghan benefitted strongly from transfers from left-wing Independent candidate John Lyons when the latter’s votes were distributed on the fourteenth count. His victory was greeted delighted chants of “Cian-o” from Social Democrat supporters celebrating the party’s fifth seat win (with a sixth expected shortly in Wicklow).

The big loser was the Green’s David Healy, who underperformed relative to his party’s other candidates in Dublin and the other remaining candidate left at this stage of the count.

Mr Healy told The Irish Times his anti-abortion stance had been raised by some voters, but added that his vote was “consistent” with what he achieved in the local elections last year.

From Sutton, O’Callaghan (40) is a former Labour councillor who left that party in 2013 over his opposition to austerity budgets and later stood as an independent. In 2016, he contested Dublin Bay North for the Social Democrats but was unsuccessful.

Sinn Fin’s Denise Mitchell had topped the poll on Sunday, recording the highest vote of any TD in the State. Fine Gael minister Richard Bruton had to wait until the tenth count to gain election earlier on Monday, thanks to transfers from his running mate Catherine Noone.

Mr Haughey, the son of former Taoiseach Charles Haughey, has represented voters in north Dublin since 1992, with a break after he lost his seat in the 2011 general election.

Mr Ó Ríordáin, too, has previously been a TD, having represented Dublin North Central between 2011 and 2016.