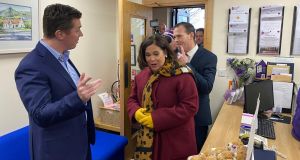 On day three, Sinn Féin decided to focus on the health crisis.

Except they didn’t expect it to be their own.

Trolley figures, additional hospital beds, more nurses and home help hours were supposed to be on the agenda when the party leader travelled in Wicklow to administer a dose of harsh medicine to local TDs Simon Harris (the Minister for Health) and Stephen Donnelly (the Fianna Fáil spokesman on Health). She came armed with a freshly minted set of proposals to deal with the crisis “in the immediate here and now” to ease the situation before long-term reforms are implemented.

Fighting fit and ready for action.

So it must have come as a nasty shock to Mary Lou McDonald when she ended up on a mercy dash down Bray Main Street with her party and reputation gasping for breath on a gurney, in urgent need of a media lifeline.

At least she was able to do that. Forty minutes earlier, after arriving at the Wicklow campaign headquarters, she had to be brought round with smelling salts when informed about the latest batch of outrageous comments culled from a Sinn Féin councillor’s now infamous podcast.

Paddy Holohan called his series “No Shame” although it seems he actually has some because he deleted the offensive episode from his YouTube channel when the controversy deepened.

His party leader was scheduled to start her walkabout in sunny Bray with candidate Johnny Brady at around 12.30 in the afternoon, but word arrived that the event would be delayed by half an hour. At this stage, more fetid nuggets from the former MMA fighter’s rancid podcast had emerged.

As quick as you could say “some f**kin’ scum women out there”, a large posse of journalists detached themselves from rival campaign tours and hightailed it to Bray to hear Mary Lou’s second critical appraisal of Cllr Holohan’s obnoxious oeuvre. She delivered her opening review the previous day when condemning the pound-shop McGregor’s disgraceful comments about Leo Varadkar’s “Indian blood” and the need to have “a family man” as Taoiseach.

But she accepted the risible excuse that his perfectly clear remarks, broadcast on his own YouTube channel, had been “misinterpreted”. He had done the right thing by apologising (as instructed in no uncertain terms by headquarters) and he would not be leaving the party.

Mary Lou must regret not throwing him out of the octagon there and then. It would have saved her from a further bruising on Friday.

She should have been out enjoying the canvass and some easy publicity with Brady, who is seeking to retain his seat in the Wicklow five-seater. Instead, she found herself on an emergency mission to repair the damage wrought by the former cage fighter who went by the nickname “Hooligan”. She threw everything into the resuscitation process. Her prompt and decisive action may have saved the day.

The journalists were waiting in the large courtyard in front of the Church of the Holy Redeemer, having been moved from outside the Sinn Féin office because they were blocking the footpath.

Mary Lou came to a halt in front of the microphones and cameras. Someone tried a question but she batted it away because there was something she wanted to say first.

There was no messing about. No equivocation. No room left for any doubt. Straight in.

“A matter came to my attention just over the last 40 minutes or so that we had to deal with and which I imagine you have questions on, and this is comments made by Cllr Paddy Holohan on his podcast.”

That matter, she declared, “is now in hand. I have moved immediately to take disciplinary action.”

Immediately. You bet she did.

Some surprise was expressed that she only just found out about the second lot of offensive remarks, given that they were in the same podcast which revealed the first batch. Did nobody in Sinn Féin listen to the full episode and save themselves this embarrassment?

Apparently not. But then again, neither did any of us media hotshots until Ellen Coyne from Joe.ie did the job properly for everyone else.

As for the comments? “Beyond offensive. I actually find them upsetting. I am very, very shocked . . . a gross breach of the [Sinn Féin] code of ethics” and “not just disappointing but deeply, deeply shocking and offensive.”

However, Mary Lou couldn’t say that their mini-McGregor was suspended as there was a procedure to be gone through and a statement would be issued in due course.

Due course was reached mid-canvass when the party confirmed that Paddy Hooligan Holohan was out on his ear.

Mary Lou may have been slow out of the blocks on Thursday, but she was decisive and commanding on Friday. This was the way to deal with a difficult problem. It was an impressive display of leadership and the leaders of larger parties could do worse than take note.

It allowed her to finally switch to the matters she had hoped to address. Having carted Holohan’s carcass off the canvass she smoothly changed gear and sweetly introduced the man who had been standing silently beside her. “I am here with Johnny Brady, our local TD for Wickla and I am delighted to be here.”

Well, she wasn’t. But that that wasn’t Johnny’s fault.

General elections are lethal when it comes to the best laid plans of political parties. Fine Gael’s first day was badly blighted by a tragic accident, which nobody could have foreseen, involving a homeless man.

In Bray, a very significant shift by Sinn Féin in its long held stance against the need for a Special Criminal Court didn’t get half the coverage it should have attracted because of the antics of a minor party member on an obscure podcast.

With horrifying episodes of gangland violence shocking the country, Mary Lou was asked if the party still opposes the Special Criminal Court. There was a sense of déjà vu about this. The beginning of the last general election saw the party in the middle of political storm when then leader Gerry Adams attacked the court following the conviction of IRA man Thomas Slab Murphy on tax offences.

She talked a lot and went around the houses on the issues but concluded that the system should be reviewed. And if the review recommends the Special Criminal Court? “I absolutely, we absolutely, accept that they have to have special provision to deal with these very violent crimes and these gangs.”

It was tough work for Mary Lou outside that church. She was relieved to get out onto the trail, where she got a big welcome in the nearby Bray Travellers Centre before hitting a few local cafes to press the flesh.

“Hello, I’m Mary Lou,” she said to people she met, who all knew she was Mary Lou.

“I know you like a film star,” said one man when she introduced herself.

“Here’s the robbers in now. The robbers are in,” shouted a woman leaving a coffee shop as the Shinners entered. Further investigation revealed the assessment emcompassed all politicians from all political parties.

A seasoned campaigner, McDonald has no qualms canvassing in hairdressers (anything Micheál Martin can do, and all that). She ran into a barbers while a man was getting a trim. He wouldn’t give his name.

She asked owner Dee if she knew Gerry Adams (“long, straggly hair, from Belfast”) as he badly needs a haircut. Dee said she’d do the honours. She may have to invest in a strimmer at this stage in Gerry’s growth cycle.

The final stop on an unavoidably truncated walkabout was at the wonderful Purple House community cancer support centre. Mary Lou took off her coat and scarf and sat down for tea for a decent amount of time with the volunteers, survivors and sufferers.

In an unusual afternoon, perhaps the most unexpected thing to happen was during the walk up Main Street into the blinding winter sun. Mary Lou McDonald, the Dáil’s sun worshipper supreme, had no sunglasses.

That couldn’t be true.

Streets closed off in Cork as city centre is hit by flooding 10:49
Union ‘cannot be convinced’ children will safely return to school after mid-term 09:41
Six weeks of Level 5: Non-essential shops to close, no visitors to homes and a 5km travel limit 07:53
Rock art 4,000-plus years old found by Sligo community project 01:00
Residents support elderly man in bid to resist notice to quit apartment 01:00