Dublin tenant propositioned by landlord ‘felt like a sex object’ 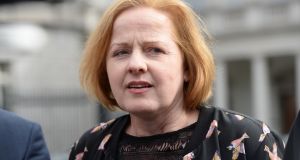 Giving details of the case TD Ruth Coppinger said the woman was renting a ‘bedsit in all but name’ in the Rathmines area. Photograph: Cyril Byrne/The Irish Times

The Dáil has heard claims that unscrupulous landlords are seeking “sex for rent” from vulnerable tenants.

Solidarity TD Ruth Coppinger said that a young woman in Rathmines in Dublin was offered free rent by her landlord “if we agree something”.

The Dublin West TD called on the Government to deal with these landlords as she highlighted the need for statistics on such incidents to be collated.

The woman, speaking anonymously to RTÉ News on Wednesday evening, said she was “shocked” by the man’s behaviour. “I felt like a sex object, that my body cost the same amount as the rent,” she said.

Minister for Housing Eoghan Murphy said the case outlined by Ms Coppinger “sounds disgusting and a horrible thing for someone to have to go through”.

It was a criminal matter and should be reported to gardaí.

Giving details of the case Ms Coppinger said the woman was renting a “bedsit in all but name” in the Rathmines area. Bedsits are now illegal under housing reforms.

She outlined some of the text message exchanges between the victim and her landlord who was said to be in his 60s.

This is the rental sector in 2019 such is the power landlords have. Here are the original messages that I read from in the Dáil.#SexIsNotRent #dubw #metoo pic.twitter.com/zAIdmU6BW9

The tenant said she had to leave because the rent was to expensive the landlord replied:“Are you coming to live with me in my house?”

She asked “are you being serious” and he said “yes. I think you’re beautiful. Maybe you could stay there for two months at half rent and we could go for dinner to “see what happens”.

When the woman rejected this the landlord texted “I’ll make you a better offer. You can stay here for free until Christmas if we can agree something.”

Ms Coppinger said the case showed it was “ high time we collated data in this country”.

She claimed the Government had allowed a situation where young women in very vulnerable situations “could be put under undue stress and pressure because the landlords rule in this Dáil and you’ve done nothing about it”.

The tenant in the case was “thankfully able to move on”.

She said the Shelter organisation in England estimated that 250,000 women had been propositioned with free or reduced rent in exchange for sex.

Mr Murphy described the situation as “reprehensible” and it was “absolutely a matter for the gardaí and a criminal matter and I hope it is being addressed in that way”.

He said the Government had earlier this year introduced the biggest reforms since rental controls had been introduced, to provide greater security for tenants.

Mr Murphy said he would speak to Minister for Justice Charlie Flanagan about what could be done in relation to these type of situations.

Speaking in the Oireachtas Housing Committee later on Wednesday, Socialist TD Mick Barry said that Ms Coppinger’s office had been inundated with “hundreds” of calls of support, as well as several people claiming to have been the victims of similar incidents.

Mr Barry said that the woman concerned was facing homelessness as a result of her flatmate deciding to leave the accommodation when the interaction with her landlord, a man in his 60s, occurred.

Mr Murphy called the case “disgusting” and said “if what you say happened, happened, that’s illegal and that’s a matter for the gardaí”.

A spokesman for the Minister for Housing said the Department had contacted the Department of Justice regarding the potentially criminal nature of the actions, and to query if any statistics were available in the area.

The department has also contacted its counterparts in the UK, as well as the charity Shelter to gain more information on how statistics are compiled in that jurisdiction.