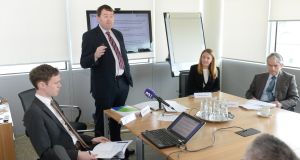 The watchdog on the State’s fiscal policy has strongly criticised the Government’s use of corporation tax revenue.

The Irish Fiscal Advisory Council (IFAC) said on Wednesday that since 2015 corporation tax had been running well ahead of projections.

However, several senior members of the council, including its chair Séamus Coffey, told an Oireachtas committee on Wednesday this transient revenue had been used to address systemic shortfalls, and for unplanned spending.

The council was appearing before the Committee on Budgetary Oversight, chaired by Fine Gael TD Colm Brophy, after publishing its pre-budget submission.

Mr Coffey’s council colleague Dr Michael Tutty said that corporation tax was to Ireland what oil was to Norway, a finite resource but one that had become “embedded in day-to-day spending”.

Another council member, Dr Martina Lawless, told the committee there had been a systemic pattern of slippage in spending by Government in recent years. She said a concern was they were not once-off spending deficits but shortfalls that were permanent and, although not planned for, got “baked into the projections” in future years.

In its submission, the council identified repeated overspending in health, the Christmas bonus to welfare recipients, and underestimations of social welfare payments as the primary causes of the slippage.

“The Christmas bonus is never included in the projections, but it should be because it is very foreseeable,” said Dr Lawless.

We have frequently advised the Government to stick to the plan. If they stuck to the plan they would have a larger surplus

Mr Coffey and his colleagues said the extra revenue from corporation tax should have created significant surpluses each year from 2015, but most of it was swallowed up by spending.

The UCC economist said the funds would have been more prudently used to pay down debt rather than to plug holes when spending slippages emerged.

The council also criticised the Government’s medium-term plan for not being credible or accurate. It repeated the criticism before the committee, with the head of its secretariat, Dr Eddie Casey, pointing to the projections on corporation tax as an example.

Dr Casey told the committee all but €600 million of the €2.8 billion expansion was already pledged. He said of the €600 million that was flexible, €200 million was now allotted to cover the overspends on the national children’s hospital and the national broadband plan.