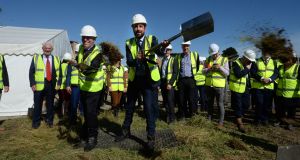 The body representing the construction industry has called for an extension of the Help-to-Buy scheme in Budget 2020 and a relaxation of mortgage lending rules, claiming these are the most effective measures to tackle private housing shortages in Dublin and other cities.

Tom Parlon, director general of the Construction Industry Federation (CIF), met with Minister for Finance Paschal Donohoe on Tuesday in advance of the body publishing its pre-budget submission.

He said there were no waiting lists for new houses being built in Dublin which suggested on the face of it that demand was being met with supply. However, he said that a combination of house prices in the capital, strict rules on mortgages and loan-to-income ratios meant new homes remained unaffordable for many couples.

On housing, he said the ratio of 3.5-times the family income meant that a household with an income of €80,000 in Dublin would be entitled to a mortgage of €280,000, which would not buy a standard family home in the capital.

While this was not a function of the Minister for Finance, but rather of the incoming governor of the Central Bank, Mr Parlon pointed to ratios of 4.5-times income in the UK, and five-times in New Zealand.

Mr Parlon called for an extension of the Help-to-Buy scheme which he said had been highly successful. In some developments, 80 per cent of the purchases were being made by first-time buyers availing of the scheme, while in many other developments, at least 40 per cent of the units being purchased were under Help to Buy.

The scheme, first introduced in April 2014, offers a tax refund for first-time buyers of newly-built homes.

Mr Donohoe and Minister for Housing Eoghan Murphy have said they had discussed the possibility of extending the scheme further in the budget but an announcement has yet to be made.

“The measure is considered the most effective intervention by Government by Irish housebuilders in terms of enabling housing supply,” Mr Parlon said. The former Progressive Democrats TD said new housing completions were increasing to close to 20,000 per annum, still short of the 35,000 per annum that was estimated as needed.

The CIF also criticised current procurement arrangements for major infrastructure projects, saying it allowed delays to bedevil large projects. Mr Parlon said it took anywhere between eight and 13 years for a road project to go from planning to completion.

“Improving this system is the most significant step the Government could take in reducing project delays and cost overruns,” he told The Irish Times.

“Infrastructure delivery is key to the success of Project Ireland 2040 [the Government’s long-term strategy to improve the country]. Unfortunately, large-scale projects, particularly outside the greater Dublin area, are delayed or stalled at a time when our regions are slipping back and facing a rough Brexit.”

The CIF budget submission also focused on labour shortages in the industry, citing particularly bad gaps in the “wet trades” (blocklaying, tiling and plastering). Part of the problem, said Mr Parlon, was that parents are discouraging their children from entering the industry because of memories of the crash from a decade ago. He claimed such a shock would never happen again as there was a concerted move away from the boom-bust cycle.

Mr Parlon added the construction industry was undergoing a strong recovery with investment expected to reach €41 billion by 2023.

“The concentration of activity in the greater Dublin area should be of concern to the Government. The CIF’s recent crane count highlighted the fact that Dublin has over 120 cranes compared to only 12 in Cork, two in Limerick and two in Galway.”

Sligo hospital apologises over ‘shortcomings in clinical judgment’ 16:25
Covid-19 restrictions in Europe: how does Ireland compare? 16:03
New children’s hospital will not be able to open all beds due to staff shortages, nurses say 15:56
Edwin Poots says he never sought to offend Catholics with Covid comments 15:45
‘It was hard enough the first time’: Clothes retailer mulls return to lockdown 15:24