Directly-elected mayors could be ‘catalyst’ for local government reform 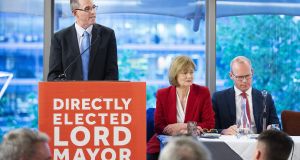 A move towards directly-elected mayors in Irish cities needs to be accompanied by local government reform if it is to make any appreciable difference to people, an expert in local government has said.

Dr Aodh Quinlivan of the Department of Government at UCC told a public meeting in Cork city organised by Fine Gael on the forthcoming plebiscites on directly-elected mayors for Cork city, Limerick and Waterford that on balance he believed the move was to be welcomed.

“Directly-elected mayors are a dominant and growing international trend. The greatest single advantage of what is being proposed is democratic legitimacy. Currently our mayors are indirectly elected by councillors and serve a term of one year, vested with mainly ceremonial powers,” he said.

The move to a directly elected mayor would mean an end to the pact system that has been the subject of much criticism in many councils including Cork City Council where the Lord Mayor has been elected by councillors under various pact agreements.

“We now have an opportunity to do it differently – a direct vote by the public, a five-year term, executive powers, and responsibility for carrying into effect the policy decisions of the council,” said Dr Quinlivan who pointed out that Ireland first legislated for directly elected mayors as far back as 2001.

He said that he had spent the best part of 20 years researching the subject, interviewing mayors in other countries and while his journey had not always been straightforward, he had concluded, albeit with some caution, that people should vote in favour of directly-elected mayors in this month’s plebiscite.

Dr Quinlivan said that one of the advantages that flows from being directly elected is that they can then provide clear political leadership and become vocal champions for their areas, Cork city, Limerick or Waterford.

“The mayor could become a catalyst for local government reform; think, for example, the mandate that a directly-elected mayor for Dublin would have. He/she would have the largest electoral mandate in the state, bar the President which is an apolitical role anyway,” he said

“You should also see quicker and more decisive decision-making.There is potential that mayoral elections will bring greater visibility to local government – perhaps more interest from the public, higher levels of participation and turnout.”

But Dr Quinlivan did strike a note of caution, pointing out that opting for directly-elected mayors of itself will not achieve the desired effect unless there is meaningful reform of how local government operates and in particular reform of how it is financed.

“Directly-elected mayors can be well placed to galvanise the support of their populations in pursuit of goals which may require considerable coalition-building efforts,” said Dr Quinlivan who admitted that there was “no doubt that direct mayoral elections can descend into a celebrity contest”.

He admitted that it may not be easy to achieve success in getting the plebiscite passed in Cork city, Limerick and Waterford as indifference, apathy and suspicion abound and he stressed the importance of using precise language so as not to alienate potential supporters.

He instanced how the Government document published in March used the phrase “becoming the face of the city domestically and internationally” which was causing some resentment in Limerick and Waterford amid fears that the directly-elected mayor would represent just the city rather than city and county.