Micheál Martin says Fine Gael wants to turn Ireland into a nation of renters, not owners 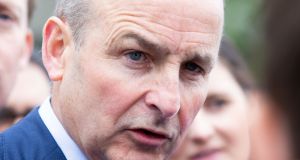 Fianna Fáil leader Micheál Martin has accused the Government of conducting a social experiment to turn Ireland away from a nation of home-owners to a nation of renters.

“There seems to be a social experiment going on here that Ireland should move away from the home ownership model and move into a rental model,” he told RTÉ Radio’s News at One.

“There are situations where people are being evicted through no fault of their own,” the Cork TD said.

“There is a case for engagement with the industry to say look, given the crisis that we are in let’s put a halt on the unnecessary eviction of people. There will always be situations where people are not paying any rent or people are being reckless as renters, we have to allow for that too, you can’t have an entirely blanket moratorium.”

The figures released by the Department of Housing put the number of homeless people in Ireland at 10,305, the worst in the history of the State.

Speaking in Cork, Mr Varadkar rejected claims that Minister for Housing Eoghan Murphy was no longer the right person for the job.

“I have full confidence in Eoghan Murphy as Housing Minister, it’s a very difficult job,” he said. “Eoghan Murphy did certainly not cause the housing crisis, that was caused by other people before this government took up office...

“While homelessness figures are not going down, the people who are being lifted out of homelessness is at a record high.”

Since February 2019, the figures show an increase of 41 in the total number of homeless, of whom 37 were children, setting a new record level.