Taoiseach urges compromise as voters go to polls in North 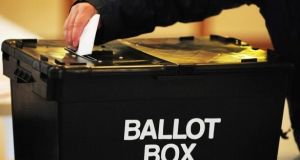 Voters in Northern Ireland go to the polls on Thursday amid a political impasse over Brexit and efforts to defrost the institutions at Stormont.

A total of 819 local government election candidates are standing across 11 council areas. There are 1,463 polling stations across the country and they will open at 7am on Thursday and close at 10pm.

Among noteworthy races for seats will be Sinn Féin’s former West Tyrone MP Barry McElduff’s efforts to return from the political wilderness.

He was forced to step aside after offending the families of those shot dead by republicans at the height of the Troubles in Kingsmill in Co Armagh.

Mr McElduff is running for a place on Fermanagh and Omagh District Council in the far west.

In Newtownabbey, near Belfast, the DUP’s first openly gay candidate is seeking election.

Alison Bennington is standing for a party which has repeatedly vetoed same-sex marriage and holds strong Christian values.

The Democratic Unionists are the largest party in the North which campaigned for Leave in the Brexit referendum.

They blocked British prime minister Theresa May’s efforts to secure a deal with the European Union over concerns about the Border backstop.

This election could be an indicator for how the parties fare in the European elections later this month. It is also the first poll since journalist Lyra McKee (29) was shot dead by dissident republicans during disturbances in Derry.

Her death prompted revulsion against the group blamed for the killing and led to a call by a Catholic priest for politicians to redouble efforts to restore devolved powersharing.

The Stormont Assembly and ministerial Executive have been suspended since early 2017.

Fresh negotiations are due to begin next week following McKee’s death.

On Wednesday, Taoiseach Leo Varadkar urged the DUP and Sinn Féin to be prepared to compromise when talks resume.

He referenced his own experience with Fine Gael operating in coalition administrations.

“So I am not calling on either party to make any specific compromise, but I am just sending the message out to both parties that they should be willing to compromise. Because without that, we won’t have an agreement.

“And I want them to know if they are willing to make difficult compromises, compromises that maybe mightn’t go down very well with their support bases, the governments will be fully behind them in that, and will give them whatever cover and support they need to do it.”

The new talks process, which was announced by the UK and Irish governments last week, will start on Tuesday, May 7th. – PA