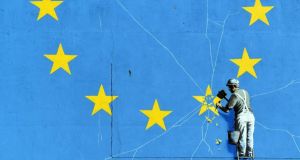 Support for Ireland remaining in the EU rose above 90 per cent for the first time last year, to 92 per cent. Photograph: Neil Hall/EPA

The number of people who believe that Brexit has made a united Ireland more likely has increased in the past year, a new opinion poll shows.

Public support for Ireland’s membership of the European Union (EU) has increased to 93 per cent of people surveyed in the latest annual poll by the pro-EU group, European Movement Ireland, and polling company RedC.

The survey of 1,000 people aged 18 and over across the country shows support for the EU at the highest level since the poll began in 2013.

Some 50 per cent of people surveyed now believe that a united Ireland as a member of the EU is more likely in the wake of the UK’s decision to leave the union, while 41 per cent disagree that this is likely.

Last year, there was an even split on this question as 44 per cent of people surveyed said that the vote by the UK for Brexit made a united Ireland more likely, while 44 per cent said that it would not.

Support for Ireland remaining in the EU rose above 90 per cent for the first time last year, to 92 per cent. The further increase, by a single point, shows that the public remains overwhelmingly supportive of membership of the political and economic bloc against the backdrop of concerns about Brexit.

The highest backing for continued EU membership was among the 18- to 24-year-old and 65-plus age groups and people living in Dublin, though it was consistently above 90 per cent across the State.

European Movement Ireland is a pro-EU, not-for-profit organisation that works to develop connections between Ireland and Europe. The group’s annual poll is regularly held up by the Government in response to claims of anti-EU sentiment in Ireland and calls for Ireland to follow the UK out of the union.

Just 56 per cent of 18- to 24-year-olds said they intended to vote in the elections.

The poll showed strong support for the euro, 20 years after the introduction of the common currency, as 86 per cent of people surveyed said that the euro had been positive for Ireland.

Opinion is more divided on whether the country should be part of increased European defence, security and tax cooperation, and whether Ireland should contribute more to the EU budget.

“The fact that the majority of Irish people are in favour of more co-operation at EU level on defence and security, as well as on tax, suggest that these issues are not as sensitive as they are sometimes depicted,” said Noelle O’Connell, executive director of European Movement Ireland.

“However, the relative high number of people that answered ‘don’t know’ to these questions reflects the need for continued and constant national debate on certain aspects of our EU membership.”

Some 11 per cent said they did not know whether Ireland should be part of increased EU tax co-operation, a position that the Government is opposed to as it aims to protect Ireland’s low corporate tax regime and competitive advantage over other countries.

The survey was conducted between March 21st and 27th, 2019, when there was uncertainty around whether the UK would depart from the EU without an agreement as originally planned on March 29th.