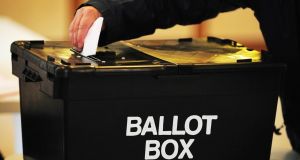 There will be overnight verification of unused ballot papers returned from the polling stations, with councils ready to begin counting on Friday at 8am. Photograph: Rui Vieira/PA Wire

Polls have closed following a day of voting in the local government elections.

A total of 819 local government election candidates are standing across 11 council areas in Northern Ireland.

No indication has yet been given as to how many voters turned out to cast their ballots at 1,463 polling stations across Northern Ireland.

There will be overnight verification of unused ballot papers returned from the polling stations, with councils ready to begin counting on Friday at 8am.

Counting will continue into Saturday before the final results are issued.

Northern Ireland’s political leaders have cast their votes in their local areas.

Among noteworthy races for seats will be Sinn Féin’s former West Tyrone MP Barry McElduff’s efforts to return from the political wilderness.

He was forced to step aside after offending the families of those shot dead by republicans at the height of the Troubles in Kingsmill, Co Armagh.

Mr McElduff is running for a place on Fermanagh and Omagh District Council.

In Newtownabbey, near Belfast, the DUP’s first openly-gay candidate is seeking election.

Alison Bennington is standing for a party which has repeatedly vetoed same-sex marriage and holds strong Christian values.

It is the first poll since journalist Lyra McKee (29) was shot dead by dissident republicans during disturbances in Londonderry in April.

Her death prompted revulsion against the group blamed for the killing and calls for politicians to redouble efforts to restore devolved powersharing.

The Stormont Assembly and ministerial Executive have been suspended since early 2017.

Fresh negotiations are due to begin next week following Ms McKee’s death.

The election is being conducted by single transferable vote, a proportional representation system. – PA