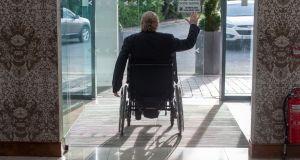 Brian Crowley in Cork where he announced that he would not be standing for re-election as MEP. Photograph: Michael Mac Sweeney/Provision

The electoral race in the sprawling Ireland South constituency has been thrown wide open by the absence of Brian Crowley, the former Fianna Fáil MEP, who dominated every election he fought here since 1994 and has retired due to ill health.

Mr Crowley’s absence leaves a huge void, and about 180,000 votes, nearly a quota and a half. The fact that this is now a five-seater – albeit one in which the winner of the fifth seat will have to wait until after Brexit before entering the parliament – further opens up the race.

A whopping 23 candidates will contest the constituency which runs from Wicklow in the east to Clare in the west, from Offaly in the north to Waterford and Wexford in the south. And though it is a largely rural constituency, it also contains the cities of Cork, Limerick and Waterford, as well as the areas of north Wicklow that form part of the greater Dublin sprawl.

Unlike Dublin, geography will matter a lot; just like Dublin, most of the candidates have little realistic hope of a seat, and the dogfight will be between the parties and the highest profile Independents.

Fine Gael is running three candidates – the two sitting MEPs Seán Kelly and Deirdre Clune, and the junior agriculture minister Andrew Doyle, whose job it is to mop up votes in the eastern part of the constituency near his Wicklow base.

The assumption in the party is that it should retain the two seats held by Mr Kelly and Ms Clune, with Mr Doyle functioning as a “sweeper” in the east.

That seems the most likely outcome though, in 2014, when Simon Harris was the third Fine Gael candidate here, he almost turned into the second, outpolling Deirdre Clune and coming within a few thousand votes of being elected instead of her.

Without detailed polling so far, and with the campaign cranking into operation only this week, few political sources evince much confidence in calling the state of the race at this stage. But it would be a major shock – and a significant blow to Taoiseach Leo Varadkar – if Fine Gael were to fail to hold its two seats.

Fianna Fáil is running two candidates, with an expectation of one seat and a hope of two. Prominent front-bench TD Billy Kelleher will seek to mop up Brian Crowley’s huge Cork vote, while Wexford councillor Malcolm Byrne surprised everyone by beating Mr Kelleher at the selection convention.

Fianna Fáil’s prospects for a second seat – which would be a significant coup – depend on dividing the constituency between the two candidates. That’s always easier said than done.

Sinn Féin’s Liadh Ní Riada put in a barnstorming performance here in 2014, winning 125,000 votes, 19 per cent of the first preferences. Although her bid for the presidency never really got off the ground, it would take a complete collapse in the Sinn Féin vote for Ms Ní Riada to miss out here. She could shed a lot of votes and still be elected.

Challenging her will be Labour candidate Sheila Nunan and the Green’s Grace O’Sullivan, both would have to massively outperform their party’s current polling strengths to become competitive. Few political insiders are tipping either, though the expectation is that the Green vote may be bolstered by climate change concerns.

There is likely to be significant attention on the performance of the highest profile Independent candidate – Wexford TD Mick Wallace. He is exactly the kind of candidate who could flourish in the European parliament election, and has name recognition across the constituency. But he will be challenged on some of his anti-EU views. In this, as in everything else, the campaign matters, and matters a lot.

Destitute in Dublin: ‘You are vulnerable in a tent. Nowhere is safe’ 18:43
Dublin homes within walking distance of park are worth more, conference told 18:08
Man who denies murdering he father says he was his mate 18:07
Court hopes to make final ruling on McNamara and Lowe insolvency arrangement 17:49
Varadkar offers Drogheda gardaí additional resources 17:48
SUBSCRIBER ONLY