‘Whatever Brexit turns out to be, we have to be ready to work and succeed’ 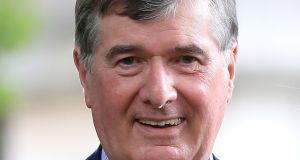 Trevor Annon, chairman of The Mount Charles Group: ‘We’re on course to achieve our target of £100 million in revenue by 2025.’ Photograph: Stephen Davison

Trevor Annon is the founder and chairman of Belfast headquartered, The Mount Charles Group, one of Ireland’s largest indigenous catering and business support services providers. The company, which employs more than 2,500 people, recently added RTÉ to a client list in the South that also includes the Abbey Theatre and Custom House.

I always considered it could be a possibility, I knew people had very strong views one way or the other on the EU but particularly on immigration numbers from eastern Europe and I expected the decision to be very close.

It could have a significant impact on the cost and availability of raw materials which would ultimately impact on us and it could seriously limit our ability to recruit and potentially retain staff from European countries. Both of those could be challenges for us.

Like many other businesses in Northern Ireland, we have worked very closely with our key business partners such as our major suppliers to ensure we are prepared for Brexit.

So while we directly may not need to make these type of contingency plans we know that our key suppliers are making them for companies like Mount Charles.

We’re on course to achieve our target of £100 million in revenue by 2025 and I believe that growing our market share in the Republic will be a major driver for our business so we are focused on our push forward in Ireland. Brexit will not change our focus.

But I do appreciate and understand there could be significant logistical challenges posed by Brexit for our suppliers.

Thirty years ago I saw an opportunity to set up a local company to take on the big boys. The Mount Charles Group today is the largest family owned, independent catering and business support services organisation in Northern Ireland but I still want the business to grow and develop further.

Whatever Brexit turns out to be, we have to be ready to work and succeed regardless.

Because we do not manufacture or export we’re not in the same difficult position that some companies now find themselves in Northern Ireland. But like every other company we are watching and waiting so until we discover what Brexit really does mean for us and everyone else I doubt anyone can truly be ready.

The bottom line for everyone is a deal – we need some kind of arrangement in place that does not disadvantage Northern Ireland businesses. I still believe that there is bound to be some practical arrangement that will preserve the status quo and ensure that there will be free movement of goods and people and hopefully no new tariffs.

One of the major challenges that businesses in Northern Ireland might face in the future is the exit from Northern Ireland of skilled and hardworking workers from eastern Europe depending on what kind of Brexit we end up with.

We’re aware some of our suppliers have been stockpiling certain goods but this would not be possible when it comes to fresh produce. Most goods have a shelf life and there is also a question of economics when it comes to stockpiling for many firms and the maximum level of stock that can be held.

Specifically in relation to our catering services we operate across 150 sites. In most instances our menus are prepared one month in advance so it would not be possible to “stockpile” in the traditional sense of the word.

I would like governments to support my company. We are a Northern Ireland company operating in the UK and Ireland. We are investing and creating jobs and I would like the UK government to fight my corner and deliver a pro-business Brexit.

I think it has been a total shambles. I am definitely not setting myself up to be any kind of expert on the Brexit negotiations but if you think of the Brexit referendum and the kind of misinformation – for example like the line about the UK “sending £350 million a week to the EU which could be spent on the NHS” – it was very difficult for the UK electorate to make an informed, qualifiable decision on Brexit in the first place.

If a lot of the potential obstacles that we are now facing are put on the table, there could be significant challenges for our industry – particularly for suppliers in relation to raw materials. There is also the question of how Brexit could impact on the labour market.

Would you have liked to see a second referendum on Brexit?

No because the UK referendum decision was to leave the UK, Northern Ireland may have voted to remain in the EU but the overall outcome was to leave and so I believe that decision has to respected.

1 We are ‘sale agreed’, but can we go back with a lower offer?
2 Working from home: New costs, new stresses and little relief
3 McKillen companies get court order on size of basements
4 Restaurants and gastropubs hope to avoid a dry reopening
5 Ryanair to challenge Lufthansa’s €9bn aid
6 Eason to lay off 150 staff as it prepares for June reopening
7 HSBC board rethinks overhaul and seeks even deeper cuts
8 New pre-booking app for customers a hit with retailers
9 Joint accounts: if one of us dies, can the other access the money?
10 Hot-desking continues at bank call centres, workers say
Real news has value SUBSCRIBE