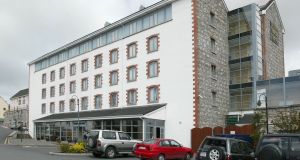 Ms Justice Denham decided that Mr Justice Woulfe’s attendance at the dinner in the Station House Hotel, Clifden was not an offence that warranted his resignation. Photograph: Joe O’Shaughnessy

The outcry that followed the Oireachtas Golf Society dinner was prompted by many things, but orbited one central idea: that the politicians and others who attended flouted the rules which everyone else had to observe. That there was one rule for them, and another for everyone else.

Now it seems that there is one rule for politicians and another for judges.

The report into the affair by the former chief justice Susan Denham concludes that while Séamus Woulfe was wrong to attend the dinner, it is not a resigning matter.

The judgments of politics, of course, are rougher and readier than those of the law. They must negotiate the storms and squalls of public opinion, are less concerned with due process and prize immediacy above nuance and proportionality.

No consolation that to the politicians forced to resign after the Oireachtas golf dinner. We can guess their reactions when they heard that Ms Justice Denham had decided that Mr Justice Woulfe’s attendance at the dinner was not an offence that warranted his resignation.

At the height of the controversy, as politicians rushed to throw themselves on their swords, it was widely assumed in Government circles that Mr Justice Woulfe’s resignation was only a matter of time. Now he will sit on the Supreme Court when it assembles next week. (Though it can probably be assumed he will be rather more careful about his socialising in the future) But there is no way back for Dara Calleary, or Phil Hogan, or the others.

They are not the first politicians to have cause to reflect on the brutality of the quick judgements politics often demands. Alan Shatter was vindicated by an extensive legal process which saw the report that prompted his resignation as Minister for Justice in 2014 struck down in the courts, which declared that his fundamental and constitutional rights had been breached. His resignation effectively ended his career.

His successor Frances Fitzgerald was forced to resign in 2017 after a related controversy but a subsequent report a few months later declared her blameless.

Both had failed to manage the politics of the situations that confronted them. But they were not guilty of what they were loudly accused of.

But in truth, the golfgate resignations were in a different category. There was public fury at the revelations that a group of politicians and (mostly) ex-politicians should congregate for a social event which may have breached the letter – and certainly the spirit – of the restrictions under which the entire country was chafing.

It is true that the public reaction was – for a time anyway – verging on the hysterical. But it was genuine, heartfelt and spontaneous.

It is true that some parts of the media enthusiastically fanned the flames of public anger. But they did not invent that anger.

Most of the politicians who attended knew themselves they shouldn’t have been there. While the new regulations were not yet in force, Dara Calleary had, after all, sat at a Cabinet meeting the previous day and approved them.

Phil Hogan was in a slightly different category. He tried to hang on but was undone as much by the conflicting accounts he gave of his observation (or non-observation) of travel and quarantine restrictions in the weeks before the golf dinner than by his attendance. And yet in the wake of Ms Justice Denham’s report, it is hard not to conclude that Hogan could have survived if he had handled the controversy more openly and humbly. He, too, failed to manage the politics of the situation he found himself in.

Ms Justice Denham’s report certainly does not exonerate Mr Justice Woulfe. It is impossible to read the report without raising an eyebrow at the fact the judge didn’t notice there was another dinner taking place in the adjacent room, didn’t see the table plan for both rooms, didn’t see that the partition between the rooms had been opened after dinner and that the prize-giving involved people from both rooms.

But she accepts his bona fides and applies the principle of proportionality: would the punishment of resignation fit the crime of attendance? In the detached and calmer atmosphere afforded both by her status and the passage of time since the controversy, her judgment is: no. Slap on the wrist for the judge, but no question of walking the plank.

The politicians play a more brutal game. Some of them have the scars to show it.