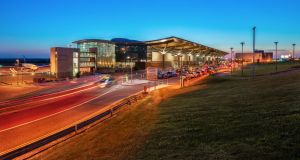 Ryanair told Minister for Transport Eamon Ryan that it would close bases in Cork (above) and Shannon airports for the winter if the Government fails to adopt the system.

Ryanair says it will close its Cork and Shannon airport bases this month if the Government fails to adopt proposed new European Union measures to end travel restrictions.

The EU is proposing a new system that will grade regions in the bloc as green, amber or red, according to their infection risk.

Ryanair told Minister for Transport Eamon Ryan on Thursday it would close bases in Cork and Shannon for the winter if the Government fails to adopt the system.

The airline called on Mr Ryan and the Government to fully adopt the new EU list, which would allow Irish people unrestricted air travel to regions designated as green or amber by the European Centre for Disease Control (ECDC).

Ryanair added it accepted that some quarantine restrictions may be needed for regions designated red by the ECDC.

The airline complained that the Government had failed to act on the findings of its own Task Force on Aviation Recovery, which reported three months ago.

“During that period of time, many EU countries, most notably Germany and Italy, have allowed the return of intra-EU air travel without quarantine restrictions, and they have delivered significantly lower Covid case rates than Ireland, ” said Mr Wilson.

He said the Government and National Public Health Emergency Team had kept the Republic locked up since July 1st, while Covid-19 rates had risen dramatically to 88.8 cases per 100,000 over the last 14 days.

Mr Wilson argued that international air travel could not be blamed for this increase in coronavirus rates.

He added that if the Government did not adopt the EU travel regulations from October 13th, then Ryanair would close Cork and Shannon on October 26th would not reopen them until April 1st, 2021, at the earliest.

Tánaiste Leo Varadkar confirmed recently that the Government was committed to joining the proposed EU system, which the Council of Foreign Ministers is set to ratify this month.

The framework is designed to end conflicting restrictions between member states that have hit air travel’s recovery from Covid-19.

1 Hurrah for the companies giving staff more time off
2 RTÉ to seek 70 voluntary redundancies as ‘large costs’ beckon in 2021
3 Covid-19 will worsen shortage of accountants, says CPA Ireland
4 Some Irish money market funds came close to danger in March
5 ‘We lost money on our planned wedding in Spain. Covid saw to that’
6 Start-up Loanitt raises €570,000 as it looks to double headcount
7 How long can Government afford to keep State pension age at 66?
8 How to make the hybrid workforce model work
9 Policy failed us during the banking crisis and it’s failing us again
10 Sustainable investment: How your pension can help tackle climate change
Real news has value SUBSCRIBE