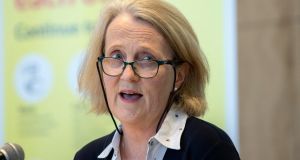 Five people contracted Covid-19 at a funeral attended by two positive cases, and one-third of staff then had to self-isolate at the restaurant where the post-burial meal took place.

The case was one of several given by HSE public health officials at a briefing on Thursday.

In one instance, one single case led to 60 others, according to public health doctor Una Fallon, who is based in the midlands.

In the funeral cluster, a son and then his father, who worked with him, tested positive. When a family member died, they attended the funeral against guidelines, and five other attendees then tested positive. The funeral party then attended a nearby restaurant for a meal, after which one-third of staff there were deemed close contacts and had to self-isolate.

In another cluster in a school, a student tested positive after cases occurred in their family. Contract tracing officials ascertained that the case originated from a trip involving young adults and a “partying setting”, Dr Fallon said. Then a second case occurred in the class, involving a student who sat at the other end of the room.

Officials questioned the parents involved to see if there was any connection but were unable to establish one. This made them uneasy, according to Dr Fallon, so they spoke to the school principal, who contacted the teachers. From one teacher it then emerged that the two students had swapped desks for one class so one could be near the white-board.

Now that the connection was established, and given no-one else was affected, officials determined there was no need to send any of the other classes home, she said.

In a third example, a case arose in a factory with no obvious cause. It then emerged that the person involved had moved jobs from a meat plant, so public health officials were satisfied they had identified the source of the infection.

Dr Fallon said contact tracers varied their focus according to the facts of individual investigations; in some instances, they concentrate on the “where and how”, while in others their focus is on preventing onward spread.

Asked about the source of infections, she replied: “It’s about proximity and congregation and alcohol”.

HSE chief executive Paul Reid said he understood the growing frustration among the public over the “continued uncertainty” surrounding Covid-19. But he appealed to people not to blame particular sectors of the economy or society.

At various points, the finger of blame has been pointed at transport, meat plants, direct provision, schools and young people. “From our perspective, it just adds to the stigmatisation of some quarters of the economy and society.”

With 121 Covid-19 patients in hospital and 22 in ICU, Mr Reid said the system was not overwhelmed but the situation was becoming difficult and challenging.

HSE chief clinical officer Dr Colm Henry described the rise in positivity as troubling but said a greater proportion of infections was being captured than earlier in the pandemic.

Testing has taken place in 183 schools with 1,300 students and staff being tested as contacts.