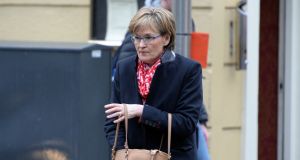 A hearing to decide whether to confirm Ireland’s commissioner-designate Mairead McGuinness as the new chief of financial services will take place on October 2nd.

Nominees to the European Commission must be cleared of conflicts of interests and then be confirmed in a vote of the European Parliament following a hearing by MEPs.

On October 2nd, “MEPs will evaluate if she is suitable to become a member of the College of Commissioners and if she is qualified to carry out the particular duties assigned to her,” a statement by the European Parliament said.

As Ms McGuinness has been nominated to the financial services, financial stability and the Capital Markets Union portfolio, the parliament’s economic and monetary affairs committee will have the task of scrutinising her as a candidate.

Valdis Dombrovskis, who is becoming the new trade commissioner to replace Phil Hogan, will also undergo a hearing on the same day.

After the committees evaluate how suitable the candidates are for their roles and make recommendations, the issue will be put to a vote by all MEPs in the European Parliament, scheduled for October 7th.