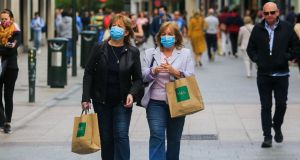 Reduction of social contacts including in people’s homes will be the “key ingredient” across all levels of the Government’s mid-term plan because the disease is most prominent in homes, the Taoiseach has said.

Micheál Martin said that keeping schools and third level institutions open will be the Government’s top priority, ahead of pubs, aviation and sports.

There would be restrictions across all five proposed levels in the proposals for the next six months to be announced on Tuesday, “even in the home because that’s where the prevalence of the disease is most dangerous and still alive in too many households”.

Mr Martin’s comments come as cases of coronavirus rise in Ireland with a particular focus on the capital where the disease is said to be spreading rapidly in households.

Gardaí said on Sunday they had stepped up high-visibility patrols in the capital as medical authorities warned the city and county faced a “critical moment” in the fight against the virus.

The Government’s plan is expected to see the entire State placed on Level 2 status, the second most benign of the five levels. This is despite current case high levels in Dublin warranting Level 3 at least. Government sources said Dublin was likely to be included with all other counties on Level 2, with some text to acknowledge higher levels of the virus in the capital.

Over time the plan will allow for different regions to be at different levels, depending on the situation on the ground, sources said. However, no more than two levels would be allowed at any one time in the State, given its small geographic size.

At Level 2 status, sports grounds would allow no more than 50 supporters, according to National Public Health Emergency Team (NPHET) advice to the Cabinet. However, Ministers at the Cabinet sub-committee on Thursday expressed strong disagreement at those low numbers and the plan is expected to increase the numbers allowed under each level significantly, to several hundred under Level 2.

The Government is also considering allowing larger attendance, up to 5,000 at large stadia, but numbers have not been finalised.

Minister for Transport Eamon Ryan also hinted yesterday the Government will consider switching from quarantine to testing for people entering the country.

The Government is expected to adopt the EU colour-coded proposal for common travel which favours testing over quarantine. “I believe that has real benefits. ” he said .

Stressing that personal behaviour “will be the key message” because “fundamentally we will successfully deal with Covid if we personally as individuals adhere to the fundamentals of public health advice,” he said.

He acknowledged that the priority will be keeping schools and colleges open ahead of pubs, aviation and sports and said that research had shown significant regression in children from being out of school for so long.

He said they wanted to keep sports going and the Gaelic championships completed. The mental health impact of Covid-19 is significant and will perhaps be more significant over time and “sports, the arts and education are key ingredients” to strengthen resilience.

Speaking on RTÉ’s The Week in Politics, Mr Martin denied the Government was reacting too slowly in waiting until Tuesday to bring in restrictions when Covid-19 levels were rising significantly, and after the acting Chief Medical Officer (CMO) Dr Ronan Glynn called on the community to restrict social engagement and reduce numbers in the home.

“We will be acting decisively”, the Taoiseach said adding that the guidance about individual households and numbers in the home would not “per se need a regulation” because that has been guidance from the outset.

He said the Government had accepted “the broad thrust” of the advice from NPHET and they had to learn from what had been done in the past.

The severe restrictions brought in in Kildare, Laois and Offaly had worked.

Mr Martin expressed surprise at reports in the Irish Mail on Sunday that members of NPHET feel angry, ignored and exhausted and that they had to give separate briefings to the Taoiseach and Tánaiste.

“I’m surprised at that,” he said. He had regular daily phone calls with the CMO which he believed as Taoiseach he should do and they had always broadly accepted NPHET’s advice.

The Taoiseach said he was concerned at the “extreme” and “aggressive” marching against public health advice, in the march in Dublin on Saturday

But he said the vast majority of people were adhering to the public health advice and mask wearing had gone up to 90 per cent competed to 16 per cent in April.

He also said herd immunity did not work and anyone who had contracted the disease and been in hospital of intensive care would say “you don’t want to get this”.

The Government is looking at joining the EU system on economic connectivity and travel. Mr Martin said they were also looking at travellers from “some red listed countries” having to have tests in advance of coming into Ireland.