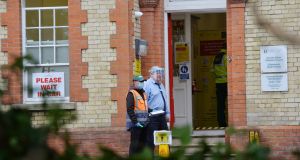 Scottish health authorities contacted Ireland seeking assistance with Covid-19 testing but the State could not help, Taoiseach Micheál Martin has told the Dáil.

He said Ireland is meeting demand but there is a “global competition in terms of testing kits and ingredients for it”.

Mr Martin, who was answering questions about Brexit, also told Opposition leaders that “logic and common sense should dictated a sensible Brexit deal in terms of the future relationship between the EU and UK”.

He stressed that “Europe has been rock solid and shown tremendous solidarity” with Ireland throughout the Brexit negotiations and that would continue.

He said the EU was remaining very firm on the necessity for the UK to make amends for the Internal Market Bill, which he said represented an unacceptable breach of its international responsibilities.

Labour leader Alan Kelly asked the Taoiseach what discussions he had had with British prime minister Boris Johnson about fighting Covid-19 as the UK was moving to their version of level four of restrictions.

Mr Kelly said there had been some discussion in the UK “of a two-week circuit breaker lockdown which would impact the North” and questioned what preparations had been made for the co-ordination of activities on both sides of the Border.

The Taoiseach said that in terms of testing and tracing, the British system is under acute pressure. “We’re not. Our system is meeting demand.”

“My understanding is that the Scottish system did contact us to see if we could help out about spare capacity. We just weren’t in a position to do that.

“So far we’re managing. We can meet demand as it presents itself right now.”

He added that the HSE is consistently looking at ways to improve in terms of capacity. “We have capacity to do 100,000 tests. Having that capacity doesn’t mean we have to do that.”

There was a memorandum of understanding on Covid-19 and there was ongoing contact between both sides of the Border and “we are endeavouring to harmonise in so far as we can”.

Earlier, People Before Profit TD Richard Boyd Barrett hit out at British prime minister Boris Johnson and the decision to introduce the Internal Market Bill which would overturn sections of the Withdrawal Agreement in relation to the protocol on Northern Ireland.

He said they had to make it absolutely clear to Mr Johnson “and his gurus including Mr (Dominic) Cummings” that “peace and stability of this island comes ahead of his reckless race to the bottom agenda” and that there would be no border.

The Dún Laoghaire TD said it was also important to “send message to the EU that if things go badly and if we face possibility of the hard Brexit because of his recklessness” that Ireland would not be used as a pawn to protect EU markets.

She highlighted widespread US support for the Belfast Agreement and for the view that any US-UK trade deal was contingent on it not being undermined.

It had never been more important than now that the Government in Dublin holds the British government to account and “holds their feet to the fire”, she said.

Mr Martin said peace and stability comes first within the overall issue of Brexit and the EU is solidly and constructively working with Ireland. “We are part of one team.”

He said “logic and common sense should dictated a sensible Brexit deal in terms of the future relationship between EU and UK”.

“Europe is not going to be distracted or in any way blown off course by this latest initiative by the UK.”

He added that the UK still saying it does not want a hard border in Ireland and wants to implement the Withdrawal Agreement notwithstanding their reservations about the internal market.

He stressed there was “no diktat” from Europe which adopted a spirit of collegiality in its approach. Europe has been rock solid in its approach and had shown tremendous solidarity with Ireland throughout, he said.