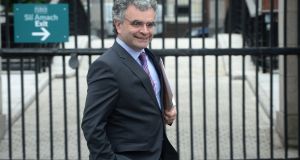 Taoiseach Micheál Martin and new Government Chief Whip Dara Calleary sought to put the controversy over Mr Calleary’s appointment behind them on Monday night, but local feelings in Mayo continued to run high, where one local party official told Mr Martin that he “need not show his nose in Mayo”.

Speaking to journalists after the first full meeting of the Cabinet, Mr Martin sought to move on and signalled that the appointment of junior ministers on Wednesday would address the regional imbalance in the Cabinet.

The Taoiseach said the position of chief whip would be extremely important in a “tripartite Government”, and also defended the regional balance of the Cabinet.

“Dara Calleary is from the west, Hildegarde Naughton as well and we are a Government for the entire country and that is a very important point and that will remain the case, and part of the remit of the programme for government is regional development and trying to change direction so that we get a better balance of economic development.

“That is not dependent on any one Minister. That is a collective responsibility of the entire Cabinet and will remain so.

“There are further appointments to be made as well.”

In a series of interviews, Mr Calleary acknowledged that he had been let down by Mr Martin’s failure to appoint him to a full Cabinet role, but resolved to do the whip’s job as best he could.

“We had a very difficult conversation,” he told Midwest radio early on Monday. “I told him I was disappointed. I had hoped to lead a department, it had always been my ambition, and it remains my ambition today. It will happen, it will absolutely happen.

Later, he told RTÉ that it had been “a difficult time” for him since the announcement on Saturday. But said he would “get back on the horse” and “get on with it”.

But tempers continued to run high in Mayo, with the chairman of the Ballina Fianna Fáil comhairle ceantar Matt Farrell saying Mr Martin “need not show his nose in Mayo”.

Mr Farrell told both Midwest radio and RTÉ radio’s News at One that the general consensus was that Mr Martin would not be welcome in Mayo while he is Taoiseach.

Mr Farrell said he could not say why Mr Martin had appointed first-time TDs as Ministers while someone with the experience of Mr Calleary was overlooked.

Not having someone from the west of Ireland in the Cabinet was “the old story again of to hell or Connacht”.

Any time “anything was being handed out”, the west was always the last to be chosen, he added.

“Rural Ireland is being neglected,” he said.

The Government is due to meet again on Wednesday when it is expected to name the remaining 17 junior ministers; three “super junior” ministers who sit at the Cabinet table having been named along with the Cabinet proper on Saturday.

It is expected that Fianna Fáil and Fine Gael will have eight junior ministers in total, with the Greens having four, including their super juniors.