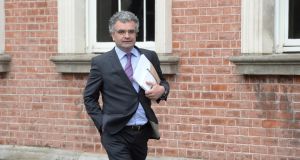 Politics is a brutal business sometimes. Even when you’re on the winning side. Dara Calleary was expected by almost everyone – including himself, his supporters in Mayo and his friends in the parliamentary party – to be appointed to a senior post in Cabinet. That assumption, it turned out on Saturday afternoon, was incorrect.

There was no warning of the let-down in advance. Calleary found out when he went in for his meeting with Micheál Martin in the hours after he became Taoiseach. It was, by all accounts, a difficult encounter, and Calleary left the building devastated. The news ran around the political class like wildfire.

The humiliations of politics are painfully public, and after the initial shock Calleary has borne his with some fortitude and dignity. He acknowledged the hurt, but then resolved to move on.

Within Fianna Fáil there have been a few days of semi-murderous dissent, not just from the ranks of the unfavoured in the parliamentary party but from the organisation in the west of Ireland, which sees in Calleary’s non-promotion a slight on an entire region always sensitive to being ignored by Dublin.

The ill-feeling in the west is real, if overdone. Pleading that your parish/town/county/region is ignored by the government is so familiar a refrain in Irish politics it has become banal.

The anger in the parliamentary party is real too, although much of it is jealousy at the elevation of blow-in Stephen Donnelly and new TD Norma Foley rather than camaraderie with Calleary.

Few TDs would rather the deputy leader in the Cabinet than themselves. At a basic level politicians are all sole traders. The idea they are ready to march on the Taoiseach’s office to get a job for someone else is not one rooted in reality. Like all of these rows it will pass quickly enough.

Moreover, there are many people in and around politics who have lost their jobs in recent days – the Fine Gael Cabinet members (two of them from the westnorthwest region, remember), their advisers and drivers, staffers of all ranks – they have not just lost out on a promotion, they have become unemployed.

It is also wise to keep in mind that for most of the public jobs for politicians is a topic in which they are profoundly disinterested. When the Junior Ministers are announced on Wednesday – a major event in political circles and a chance for Martin to calm the unrest – they will be just as uninterested.

And yet it is hard to escape the conclusion that this was an avoidable stumble for Fianna Fáil. Cabinets nearly always try to observe some geographical spread. They do that for a reason. Martin decided it wasn’t important enough. Early days, and he is piling up the enemies.

Council ought not to have brought contempt claim against receiver, court told 20:27
Archbishop Martin calls for some churches to be allowed host greater numbers 20:24
Over 90% of parents want schools fully open in autumn - survey 20:23
Tony Holohan to step back from role as chief medical officer 20:12
Social media’s ‘toxic elements’ criticised by mental health minister 19:50

1 Tony Holohan to step back from role as chief medical officer
2 Pygmalion pub mired in weekend social distancing row
3 All change at the unique Ashford Castle in era of Covid-19
4 Bobby Storey: The IRA's planner and enforcer who stayed in the shadows
5 Several factors pushing Boris Johnson towards a Brexit deal with Brussels
Real news has value SUBSCRIBE