Not enough to be ‘not racist, we must be anti-racist,’ says councillor, who speaks of her heritage 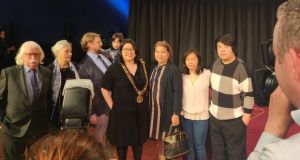 Green Party councillor Hazel Chu was elected Lord Mayor of Dublin, at a vote of Dublin City Council in the Mansion House on Monday evening.

Ms Chu is the cathaoirleach of the Green Party and spokeswoman for enterprise. She was elected to the council as a first time candidate in the 2019 local elections, topping the poll in the Pembroke ward with over 4,000 first preferences.

Born in Ireland to parents from Hong Kong, she is the first elected councillor of Chinese heritage in the Republic.

She becomes the first Lord Mayor of Dublin from the Green Party since John Gormley held the title in 1994 – and would later go on to lead the party.

In a speech after her election, Ms Chu said she would use the position to have “an open and frank conversation on the topic of racism and gender inequality.”

“In recent years, we have seen the polarisation of politics in countries overseas, Ireland is not immune to this,” and had seen evidence of far-right groups in recent years, she said.

The Black Lives Matter movement had taught her there is no such thing as an “innocent bystander,” and it was not enough to be “not racist, but we must be anti-racist,” Ms Chu said.

She recalled how her mother Stella came from a family in Hong Kong that “was not well off,” and she would sell flowers in a market after school. She moved to Ireland in the 1970s and “worked night and day washing dishes in a restaurant off O’Connell Street, dreaming of a better future for her own daughter,” she said.

“I wonder as I sit here if she dreamt her daughter would become the ninth female Lord Mayor of this great city,” Ms Chu said.

Ms Chu said she had a dream for her own two-year-old daughter Alex, that she would grow up to “celebrate her diversity rather than being ashamed of it.”

Ending her acceptance speech Ms Chu said she would like to thank her mother, “who worked endlessly to give us the future she never had.”

Green Party councillor Michael Pidgeon nominated Ms Chu at the meeting, who he said would be the first person of colour to hold the post, and would represent a Dublin “which is changing.”

“Hazel’s election as a woman and person of Chinese heritage would be an important step in sending a progressive message to some groups who need to hear it,” he said.

Fine Gael had nominated Ms Feeney for the role, who was first co-opted onto the council after Kate O’Connell’s election to the Dáil in 2016 and was re-elected to the council last year.

Ms Chu was elected to the position as part of a voting pact agreed between Fianna Fáil, the Greens, Labour and the Social Democrats, which included rotating the role of Lord Mayor.

Fianna Fáil’s Paul McAuliffe was the first elected Lord Mayor under the deal, called the Dublin Agreement. Ms Chu takes over from Fianna Fáil councillor Tom Brabazon, who replaced Mr McAuliffe after his election to the Dáil.

Ms Chu was one of 49 councillors elected for the party among the “Green wave” during the 2019 local elections.

Ms Chu studied history and politics in University College Dublin, where she was involved in running debating championships and the Philosophy Society. She then went on to graduate from King’s Inns, but to date has not practiced as a barrister.

Since her election to the council Ms Chu has been a high profile media performer for the party, and has frequently spoken out against racist abuse she receives on social media.

Her partner is Green Party TD Patrick Costello, and they have a two-year-old daughter Alex.

She got involved with the Greens after managing Mr Costello’s successful local election campaign in 2014. In the aftermath of the party’s electoral wipeout following its last stint in government, the canvassing team often consisted of just the two of them.

Following her spectacular performance at the local elections, there was speculation that she might stand as a running mate to party leader Eamon Ryan in the Dublin Bay South constituency, but amid fears that this strategy could split the vote dangerously and elect neither – or cost Ryan his seat – the plan never got off the ground. Nor was Ms Chu successful in a bid to be one of the party’s Seanad candidates this year.

Relations with Mr Ryan are said to be cool since, and Ms Chu was one of the most prominent party figures who opposed entering coalition with Fianna Fáil and Fine Gael, part of a group that included Mr Costello, Neasa Hourigan and deputy leader Catherine Martin’s husband, Francis Noel Duffy. However, they are part of the mainstream of the party, rather than from the anti-government extremes such as former candidate Saoirse McHugh and Cork councillor Lorna Bogue.

Previously she worked as head of corporate communications for Diageo Ireland, who produce Guinness, Smithwick’s, and Smirnoff vodka. Ms Chu has more than €12,000 in shares in the drinks producer, according to ethics declarations filed with DCC last year. The shares were acquired as part of a bonus scheme structure and an employee saving scheme.

She has also previously worked for St Michael’s House and Electric Picnic, and in 2009 volunteered for six months as a teacher in a school in rural China.

The role of Lord Mayor has been held by politicians from immigrant backgrounds on a number of occasions in the past.

Two brothers, Jean Desmynieres and Louis Desmynieres, were members of a French Huguenot family who both held the title in the late 1660s.