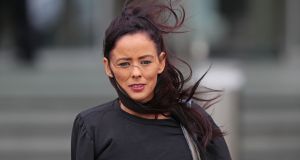 Newly appointed Traveller rights activist Senator Eileen Flynn has said she wants to be the person to “break down barriers for Traveller people and for those at the end of Irish society”.

Addressing the first meeting of the new Seanad Ms Flynn said that for “over 30 years Travellers have fought to be around the political table and to be heard”.

She said they “finally” had a voice in Seanad Éireann and “we do need a voice”.

Ms Flynn who was just two votes shy of winning a seat in the April election for the Upper House received a round of applause for her debut speech at the first meeting of the new Seanad on Monday, held at the Convention Centre Dublin, to comply with social distancing regulations.

The only non-party figure among the 11 nominees, she came close to a seat in the Seanad vocational panel election in April. From Ballyfermot in Dublin but living in Donegal, she said she wanted to be a “voice for those at the very end of society.

The new Senator said “I look forward to working with everybody and hopefully we can all learn from each other and hopefully I’ll be that person that will break down the barriers for Traveller people and also for those at the end of Irish society”.

In a lengthy session at which a majority of the 60 Senators spoke, the House also elected Fianna Fáil Senator Mark Daly as Cathaoirleach of the Seanad by 46 votes to six in the Upper House.

Mr Daly was sacked as deputy leader of the House in 2018 when he and TD Éamon Ó Cuív took part in the unsanctioned election launch for the party of a candidate in Fermanagh.

He was the surprise victor in a three-way internal Fianna Fáil contest for the nomination, against outgoing cathaoirleach Denis O’Donovan and Diarmuid Wilson at a meeting of the party’s 20 Senators.

Mr Daly’s victory after an assiduous campaign came as a surprise to many in what was described as a “tight” vote but one Fianna Fáil Senator said the party needed to assert its identity and “Mark best filled that vision”.

Another Senator said “Denis O’Donovan and Diarmuid Wilson are lifelong friends but were like two bulls in a field and neither would give way and Mark Daly slipped through the gap”.

Mr Daly has consistently called for the Government to prepare for a poll on a united Ireland and has written numerous reports on the issue. He is also a regular visitor to the US campaigning on the rights of undocumented Irish.

He was nominated by party Seanad leader Lisa Chambers in the plenary session. There was a formal vote because Sinn Féin nominated Belfast-based Senator Niall Ó Donnghaile but Mr Daly was assured of victory because the three parties Fianna Fáil, Fine Gael and Green Party had a majority.

The post went to Fianna Fáil following the decision to make former minister and Taoiseach’s appointee Regina Doherty leader of the Upper House.

Sinn Féin Senator Niall O Donnghaile the party’s nominee for cathaoirleach said he was “deeply disappointed” at the Government’s failure to include Unionist voices and had expected to see unionist former senator Ian Marshall return as an appointee.

His criticism was echoed by a number of Senators. Independent Gerard Craughwell accused the Government of favouring “political loyals at the expense of the marginalised” and “party over people”.

The House met to deal with emergency anti-terrorist and crime-gang legislation that had to be renewed by midnight.