Miriam Lord: Cottage pie and a pint and a trip to the barber of Seville 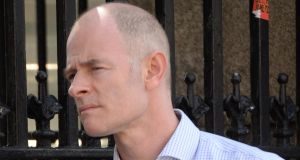 Green Party TD Ossian Smyth: “It’s a long time since I could have got something from a hairdresser.” Photograph: Dara Mac Dónaill

Talk about making a meal out of reopening the country.

“Cottage pie doesn’t protect you from the coronavirus,” Minister for Health Simon Harris told the Dáil on Wednesday. “Just to clarify.”

But it’s better than drinking bleach.

With a chicken korma in one hand and a stopwatch in the other, deliverance may soon be at hand for the nation’s bereft barflies. But the conditions under which they can finally return to slurping pints in the local are onerous.

Pub visits by appointment only from June 29th. This is to reduce the practice of allowing “walk-ins” in order to discourage stagger-outs.

Proper food to be purchased (minimum charge €9) and eaten on the premises in order to procure porter. This rule applies equally to people who eat their dinner in the middle of the day as well as those who have their dinner for their tea and those who take supper when others are scoffing dinner.

That last bit may be the Greens already influencing the outgoing administration.

Ossian Smyth made an opera-themed joke during the health debate on Wednesday. This is no way to win the support of the Fianna Fáil grassroots in the struggle to form a government.

Having paid for their meal and the drink they really came for, pint-seeking patrons will then have to depart the premises after an hour and a half.

The new rules for publicans hoping to reopen on this earlier startback date are based on licensing laws which date back to the olden days before Scampi Fries and Nobby’s Nuts were invented. They were, as Labour’s Brendan Howlin told the Dáil, brought in to curb excessive drinking not fight viral pandemics.

He thinks they’re daft. The big reason the Irish public bought so successfully into the Covid-19 restrictions was because they were told of the expert advice behind them, “setting out the reasons and underlying science for each decision to date”.

But the draft proposals on reopening public houses are all over the place. The public needs to be given the sound, logical reasoning for imposing them if they are to be taken seriously, argued Brendan.

“Because eating food gives you no additional protection. Whether you go in and have your chicken korma or your cottage pie does not give you extra protection against the virus.” What is the science behind the 90-minutes limit?

Which is when the Minister felt the need to inform the Dáil about cottage pie not being great at fighting virulent viruses.

Fine Gael’s Frankie Feighan wasn’t happy either. What about customers who go to the pub to watch a match? He quoted a Sligo Rovers supporter: “If you’re a Gaelic supporter – 70 minutes – you watch the full game but if you’re a soccer supporter – 90 minutes – in his own words you’re fecked.”

But there is no need to panic just yet. These are leaked proposals, probably to get the mood of the voters before nailing anything down.

“Wait for the final guidance,” said Simon Harris. “I am conscious it’s a draft guidance, I don’t believe it’s been published yet.”

This is why the Minister waved the National Public Health Emergency Team like a red flag before advancing with his replies. Everything depends on what the team decides on Thursday and then he will bring that decision to Cabinet which will decide, along with a large dose of “common sense”, the next phase in the reopening roadmap.

Was Simon hinting that things may be relaxed more than the leaks were indicating?

Just as well, as TDs are beginning to show the strain.

Take Joe Carey, TD for Clare. He’d be seen as one of the Fine Gael lads.

He asked the Minister for Health about travel restrictions, with particular emphasis on his local airport in Shannon. Exactly the sort of thing he would be expected to ask about.

Then he tacked on another important query.

“In relation to hair and beauty salons, is there any update to that particular question?” He stifled a sheepish smile, looking slightly embarrassed.

It was Joe’s tone though – part-fearful, part-pleading, part-weary. And you understood that here was a politician under severe pressure from constituents at their wits end and split ends for the want of a haircut.

Joe was not alone in the Dáil on Wednesday when Simon Harris was in for what may be his penultimate Covid-19 question-and-answer session as Minister for Health before a new government is formed or the formation attempt goes up in flames. Colleagues from all sides wanted the tangles teased out in this knotty problem.

The pressure has been steadily building. At last week’s Covid session, Limerick’s Kieran O’Donnell said people were in a bad way. It isn’t just businesses that are suffering. “There’s a multitude of the public going around with hair down to their knees and it’s the one area that people actually want to get back into – hairdressers and barbershops – in Limerick in particular,” he declared.

They must be in a terrible state by now.

Ossian Smyth from the Green Party wanted to know if it was possible to accelerate the opening of salons. For the sake of transparency, he pointed out that “obviously” he wasn’t asking this out of self-interest.

“It’s a long time since I could have got something from a hairdresser,” explained the follicly challenged TD, while pointing out that good hair is “a matter of confidence and a matter of comfort for a lot of people”.

Look across Europe and at all the countries where they are now open – France, Germany, Italy, Greece, Portugal, Spain.

“The barbers are open in Seville,” he quipped, as only a Green Party TD for Dún Laoghaire could. Ossian’s one-liner went down like a lead balloon with the philistines in the chamber, but Labour’s Brendan Howlin, veteran of the Wexford Opera Festival, chuckled appreciatively.

The Government – loving the suspense – will put us all out of our misery on Friday.

Cottage pie and pints all round!