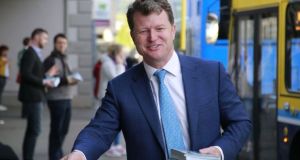 More than 40 years after a referendum was passed to extend Seanad voting rights to graduates of all third level institutions, legislation to finally give effect to the result could be among the first Bills debated if a new government is formed.

Fianna Fáil Senator Malcolm Byrne will introduce an amended version of legislation first submitted in 2013 by party colleague Thomas Byrne to expand the electorate beyond graduates of National University of Ireland (NUI) and Trinity College.

He said the Seanad Electoral (University Members) (Amendment) Bill would give effect to the result of the Seventh Amendment to the Constitution which provided for the extension of graduate voting rights.

If passed the legislation would increase the potential electorate from approximately 190,000 currently to over 800,000. Graduates will then have to apply to be on the electoral register. “It wouldn’t be automatic,” Senator Byrne said.

The first legislation to be debated by the Upper House if a new government is formed will be key sections of the Offences Against the State (Amendment) Act 1998, and the Criminal Justice (Amendment) Act 2009 which have to be renewed annually to remain in force and are due to lapse on June 29ah.

But the Wexford Senator is hopeful that he would be introducing the Seanad reform Bill “coming up to July 5th the 41st anniversary of the passing of the Seventh Amendment in the referendum”.

“Everyone could probably tell you what the Eighth Amendment is but if you ask people what the seventh amendment I wouldn’t say there is that high a level of awareness.”

The lack of awareness or interest was reflected in the 1979 referendum turnout, the lowest of any in the history of the State, when just 28.5 per cent of the electorate turned out. It was however endorsed by 92 per cent of those voting.

Senator Byrne said “we want to move on to show that we’re serious about Seanad reform early on”.

There was however no mention of Seanad reform in the programme for government. Mr Byrne said he raised it in a parliamentary party discussion and that party leader Micheál Martin said “there was a difficulty to reach agreement on it, but it’s not a case that we’re not committed to it”.

The Wexford Senator said “there are loads of problems with the Seanad and we want overall reform but this is an easy one for us to win”.