The Regulation of Termination of Pregnancy Bill was passed by 90 votes to 15 with 12 abstentions. Video: Oireachtas TV 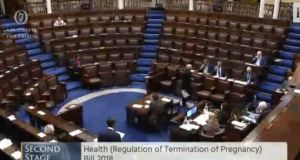 Landmark legislation to provide for access to abortion for the first time in Ireland has passed through the Dáil following an extended debate.

The Regulation of Termination of Pregnancy Bill was passed by 90 votes to 15 with 12 abstentions.

The new law will legalise free access to abortion up to 12 weeks’ gestation. Beyond that, terminations will only be legal in cases where there is a risk to the life or serious harm to the health of the woman, or where there is a diagnosis of a fatal foetal abnormality.

The Bill will now go before the Seanad as the Government battles to have it enacted in time for its planned introduction date in January.

A total of 65 amendments were tabled but only changes brought by the Minister for Health Simon Harris were passed.

TDs on Wednesday night voted down an amendment that would remove the obligation on doctors to refer patients if they have a conscientious objection.

Over the course of the debate, a number of amendments brought forward by anti-abortion TDs were defeated.

An amendment on parental notification was defeated by 69 votes to 21.

“Despite that, it could be perfectly legal for someone under 18 years of age to consent to an abortion without parental consent.”

“In cases involving people under the age of 16, parents are involved unless there are exceptional circumstances. This is not a mystery for anyone in the health profession. There is no reason to do anything different in respect of this part of the health service.”

For this reason, he said, he could not accept the amendment.

TDs also voted down proposed amendments which would seek to set down in law what information a doctor would have to give to a woman before she could access a termination.

This would include information on “the probable anatomical and physiological characteristics of the foetus at the time the abortion is to be performed” and “alternatives to the termination of pregnancy”.

“Women should not feel pressurised into having an abortion. It is vital, therefore, that women are fully informed when comes to such a decision. It appears that this House, and indeed the Minister, wants to push abortion. He wants push it as hard as he can and hope it is taken up by as many as possible.”

The amendment was defeated by 75 votes to 10.

“This is about people in the medical profession who have a difficulty. They want to carry out their functions, but if they have a conscientious objection to participating in a termination and they are forced to do so or to make a referral, then one is as bad as the other,” Independent TD Michael Healy-Rae said.

Mr Harris said he would “defend forever” the right of doctors to conscientiously object. “Let me be very clear. The law on abortion is changing. The law on conscientious objection is not,” he said.

The amendment on conscientious objection was defeated by 75 votes to 30.

One change made to the Bill last week would see the legislation reviewed after three years instead of five years.

Another amendment which was accepted dropped the requirement that the doctor who certifies a woman for an abortion must be the same one who performs it.

This would allow a second medical practitioner to become involved following the three-day waiting period, should the first be unavailable.

Another change, which was regarded as symbolic, saw a section on proposed offences moved to a different position in the Bill.

One of the lengthiest debates was around the issue of decriminalising abortion.

Under the new law, any woman who accessed an abortion in circumstances beyond the legal grounds would not face criminalisation, but doctors who perform illegal abortions or family and friends who help a woman access an illegal termination could still face 14 years in prison.

Efforts to overturn those provisions were unsuccessful as Mr Harris said it was in the woman’s interest to leave the provisions inside the Bill.

“Helping a pregnant woman to end her pregnancy outside of the provisions of the Bill is not in her best interests and may on occasion put her health or her life at risk.”

There were numerous accusations of filibustering throughout the debate.

1 Six weeks of Level 5: Non-essential shops to close, no visitors to homes and a 5km travel limit
2 Covid-19: State moves to Level 5 for six weeks with hopes of ‘meaningful’ Christmas celebrations
3 Life under Level 5: What will the next six weeks look like for Ireland?
4 Coronavirus: Why Level 3 failed and why Level 5 might too
5 Bill that overrides UK’s Brexit deal denounced in House of Lords
Real news has value SUBSCRIBE