Landlords who breach rent price caps will be fined 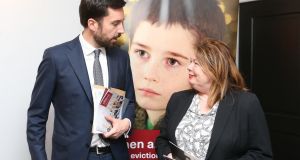 The Minister for Housing Eoghan Murphy has confirmed landlords who breach rent price caps will face sanctions, including fines under new legislation.

The Government introduced a four per cent cap in 2016 on rental increases in designated rent pressure zones in a bid to protect tenants from soaring rents.

The Bill will also set out a longer notice of termination period, which will “essentially double the notice to quit period”, Mr Murphy said.

Mr Murphy said renting is going to become a “bigger part of our housing landscape” and the legislation will give “stronger protection” to tenants.

Speaking at the launch of Threshold’s annual report on Wednesday, Mr Murphy also said he has spoken to the Attorney General about incorporating a rent register in the legislation.

“I believe rent transparency does mean a rent register and I see no reason why we can’t do it like we have done with the property price register and I’ve put that to the Attorney General and said this is what we want to incorporate in our legislation,” he said.

Mr Murphy said the RTB is “building a system” to provide for a rent register and there are “technical aspects” to be worked out.

“The money and resources are there, it’s now about getting on and doing it,” he added.

Mr Murphy said there are “other things” needed for the rental sector that may be more complex, which will be brought forward in a separate bill.

There will also be increased funding for the RTB and Dublin City Council to carry out investigations and inspections, he said.

The minister meanwhile denied reports that homeless families will be moved out of hotels over the Christmas period.

Meanwhile, housing charity Threshold said it has seen a dramatic rise in the number of calls it received from tenants in danger of losing their homes because of landlords claiming they were going to sell the property.

Almost a third of calls received by the charity last year were from tenants who had been told their tenancies were coming to an end, up from 18 per cent in 2016.

Overall, Threshold received 73,526 calls in 2017, up from 71,319 the previous year. Calls also related to rent review/increases (18 per cent), seeking accommodation (12 per cent), standards and repairs (seven per cent) and deposit retention (7 per cent).

Aideen Hayden, chair of Threshold said rent pressure legislation “is not working”. Ms Hayden said the charity has seen rental increases of up to 100 per cent through their services.

“The reality is this situation is out of control and can’t be allowed to continue,” she said.

Ms Hayden said while the charity welcomed greater powers for the RTB, she called for a “transparent rent register”.

“Without a transparent rent register, which sets out exactly what ... tenants are paying for rents, we will not be able to effectively enforce that legislation,” she said.

Separately, the director of the Residential Landlords Association, Fintan McNamara said that “by and large” landlords do not issue notices of termination unless they genuinely intend to sell.

He said the rent cap of four per cent is already causing problems for landlords who, even if they take in new tenants, cannot increase rent by more than four per cent even if what they are charging is half the market rate.