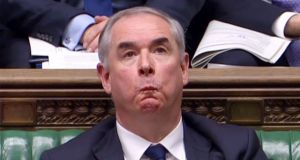 Britain’s attorney general Geoffrey Cox reacting as the outcome of a vote on a motion to find Government ministers in contempt of parliament is passed. Photograph: Getty Images

From the Irish viewpoint, the conclusions of the legal advice to the UK government on the Border aspect of the Brexit withdrawal deal are merely a statement of the obvious.

But in Westminster they are nonetheless greeted as incendiary.

The full text of the advice from the attorney general (AG), released on Wednesday, warns the UK government that the backstop arrangement for the Irish Border – involving the UK entering a customs union with the EU – could last “indefinitely”.

The so-called UK-wide customs union, together with some regulatory checks on goods moving from Britain to the North, are the measures set down in the agreement to apply if no other way is found to avoid a hard border on the island of Ireland.

This is the backstop – the insurance policy in relation to the border. The AG’s advice has highlighted the fact that this agreement, once triggered, could remain in place for a long time and tie the UK up in lengthy and potentially unsuccessful negotiations as it tried to escape.

Accepting this risk has to be weighed against the desire to reach a stable agreement on their future relationship, the legal advice said. Striking this balance was “a political decision for the government,” attorney general Geoffrey Cox wrote.

Interestingly, reports in London and comments by prime minister Theresa May suggest that she may be considering offering the UK parliament some kind of “lock” under which it would have to vote before the backstop came into place. But it is hard to see the EU side agreeing to this as anything which makes the backstop in any way contingent on a final UK go-ahead would threaten to completely undermine it. We will have to see how the plays out.

The wider political point here is that both sides have said that it is not their intention that the backstop, if it was triggered, would be a permanent arrangement. Rather it would stay in place until another solution was found, presumably via a new trade deal between the EU and UK.

However, the AG’s advice points out that there is no guarantee of another arrangement being concluded that avoids the need for border checks and so the backstop could remain in place for the long term.

The backstop, in other words, could be for good and not just some temporary “fix”. As the AG put it: “Therefore, despite statements in the Protocol that it is not intended to be permanent, and the clear intention of the parties that it should be replaced by alternative, permanent arrangements, in international law, the Protocol would endure indefinitely until a superseding agreement took its place in whole or in part, as set out therein.”

This shows the success of Irish negotiators in getting a rock-solid commitment in the draft withdrawal agreement. However it is this very fact – and its implications for the UK’s future room for manoeuvre – which is now causing such debate in Westminster.

The warning by the AG of endless rounds of talks and negotiations relate to the review mechanisms proposed in the draft withdrawal agreement. This would be overseen by a joint committee including UK and EU representatives, with disputes ruled on by an arbitration committee.

The AG’s advice appears to point to the risk of the UK getting caught in endless discussions and disputes about whether the backstop is still needed under whatever new arrangements emerge.

For the backstop to end, Cox warns, a superseding agreement is needed to take its place “in whole or in part”. And he concludes that the Withdrawal Agreement “cannot provide a legal means of compelling the EU to conclude such an agreement”. In other words, the UK has no unilateral way out of the backstop, and never will.

Of course if the Withdrawal Agreement is not signed, then the UK does not sign up to the backstop and the Irish Border issue would again be back under discussion.