Cervical cancer women appeal for Pembro drug to be made available

‘I think I’m too young to die,’ campaigner says 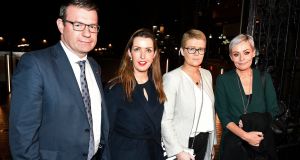 Labour Party health spokesman Alan Kelly outside the Dáil with cervical cancer patients Vicky Phelan, Tracey Brennan and Áine Morgan, who are calling for the drug Pembro to be provided by the HSE. Photograph: Dave Meehan

Campaigner Vicky Phelan and two other women diagnosed with cervical cancer have called for the Government to provide equal access to a new drug Pembrolizumab, which Ms Phelan said proved effective in combating her cancer.

On Wednesday, Áine Morgan from Co Galway, and Tracey Brennan from Co Roscommon appealed for the drug to be introduced for all Irish cervical cancer patients, where tests indicated it would be effective.

“This is a life-changing drug, this extends women’s lives, these women have to have this drug,” he said.

Ms Morgan and Ms Brennan have both had preliminary clinical tests indicating the drug would work in fighting their cancer. The two women were not part of the CervicalCheck cancer screening controversy which broke earlier this year, during which it emerged women had not been told of Health Service Executive audits that had found previous smear tests incorrectly gave them the all-clear. A High Court case taken by Ms Phelan against one of the smear test laboratories exposed the major health scandal.

The Pembro treatment costs €8,500 a dose, and the medicine is not currently licensed in Europe for the treatment of cervical cancer, but was provided to Ms Phelan off-licence and to other women caught up in the CervicalCheck scandal. Following access to the drug Ms Phelan has said her tumours reduced significantly.

Speaking to the media outside Leinster House, Ms Morgan said she had been diagnosed with stage four cervical cancer in late 2015, and despite a prognosis of one to two years life expectancy, she had just passed the three-year mark.

“I have exhausted every therapy out there, there is nothing out there. To be honest with you I think I’m too young to die,” she said.

“There’s other women like myself out there and we shouldn’t be put out there having to fundraise” for the drug, she said. Women suffering from terminal cervical cancer do not “have the luxury of time on our sides”, she said.

Mr Kelly said he estimated that fewer than 100 women currently might avail of the drug if a Government scheme was introduced granting access to the treatment.

The alternative to Pembro was palliative chemotherapy, the effects of which were “devastating”, Ms Phelan said.

Ms Brennan said she had “exhausted all avenues” in terms of available treatment for her cancer. “I’m deemed eligible for this drug through the testing that I’ve done, and we’re calling for equal access to give us a chance to fight,” she said.

Minister for Health Simon Harris has asked the HSE medicines management programme to look at what measures could be put in place to expand access to Pembro for suitable women, his spokeswoman said.

Mr Harris expected progress to be made on the examination of the issue “very shortly”, he said.