Broadband plan expected to get go-ahead in coming weeks 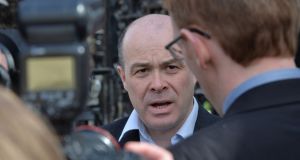 Reports at the weekend suggested former minister for communications Denis Naughten believed he should return to the Cabinet as he had been exonerated by the Smyth report. Photograph: Alan Betson

Senior officials from the Department of Communications expect to make a recommendation on the national broadband plan in the coming weeks, the confidence and supply talks between Fine Gael and Fianna Fáil have been told.

The officials were keen to stress that it was “all systems go” in the wake of the Peter Smyth report last week, according to sources present, and there was an expectation that they will recommend acceptance of the bid to the Government.

Mr Smyth’s report, commissioned in the wake of the resignation of former minister for communications Denis Naughten over private meetings with David McCourt, who is fronting the sole bid for the rural broadband contract, concluded that the process had not been fatally undermined by the contacts.

Government sources said they expected officials in the department would complete their report either shortly before or after Christmas, after which Minister Richard Bruton would bring a recommendation to Government for approval to proceed with the contract.

While significant concerns over the price of the contract remain – with some senior Government sources believing that the ultimate cost could be as high as €3 billion – the officials said the price would be paid out over a 25-year period.

However, sources with knowledge of the discussions say there will not be further negotiations on the price of the contract.

As the Smyth report shows, the department had significant concerns on the price sought by bidders Granahan McCourt, and Mr Naughten attended a meeting with the bidders to warn Mr McCourt that he would not recommend acceptance by the Government of the price the bidders were gearing up to ask for.

However, Mr Naughten also said he was desperate to keep the McCourt consortium in the process after the departure of all the other bidders.

One source said the proposal brought to Government – assuming it is approved by the department – will include the level of subsidy proposed for the project.

The Dáil is expected to discuss the broadband issue when it hears statements on the Smyth report on Tuesday evening.

Reports at the weekend suggested Mr Naughten believed he should return to the Cabinet as he had been exonerated by the report. However, sources said there was little chance of this happening. The Taoiseach’s official spokesman said last week the report represented “a partial or qualified vindication” of Mr Naughten.