Courts to resume sittings longer than two hours after getting advice 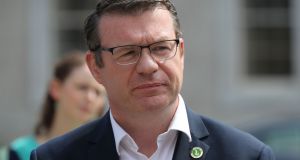 Labour Party Leader Alan Kelly: “We cannot have a George Orwell situation where some are more equal than others”

The courts are to resume sittings that last longer than two hours from Friday having received comprehensive advice on the matter, the judiciary and the Courts Service have said.

On Wednesday, the judiciary said it would not be holding sittings that lasted more than two hours in a single day pending receipt of health advice.

The announcement followed developments in the Oireachtas which appeared to indicate that there was public health advice to the effect that people should not gather in an “enclosed space” for more than two hours in any 24-hour period.

However, the head of the Courts Service, Angela Denning, has now told court staff that “in fact there is no rule that people should spend less than two hours in the same room as others”.

Ms Denning’s message to staff was based on advice received from Prof Martin Cormican of the Health Protection Surveillance Centre, the same expert who gave advice to the Oireachtas. His advice, Ms Denning said, “clarified the issues raised in the Oireachtas”.

It was after Prof Cormican gave advice to the Dáil Business Committee earlier this week that it was decided some witnesses due to give evidence to another committee about the Covid-19 lockdown should not give evidence for longer than two hours.

Ms Denning noted the professor’s advice that limiting meetings in shared spaces to two hours out of every 24-hour period could help avoid the people in such meetings all having to self-isolate should someone at the meeting later transpire to have had Covid-19.

She added that the professor did not think this was “ likely to arise with any frequency at the moment given the low incidence of diagnosed infection”.

Labour Party leader Alan Kelly on Thursday described it as “frankly bonkers” that politicians were unaware of advice about meetings in the Oireachtas of more than two hours. He said it was his party’s view that the advice was not implementable.

“The consequences of this advice for society and businesses are huge. We cannot have a George Orwell situation where some are more equal than others. If it applies in the Oireachtas and it applies in the courts, it applies to the pharmacists, to the shops, to the meat factories and the gardaí.”

He said “we cannot have a two-tier society when all of us here and the Courts Service operates on one set of guidelines and everyone else operates on different advice”.

Fianna Fáil leader Micheál Martin noted that the deputy chief medical officer emphasised that the was “no clear prohibition on meetings that last longer than two hours”.

“We should look elsewhere in Europe for examples of parliaments that have successfully restarted their work.”

Asked about the issue at a meeting of the National Public Health Emergency Team on Thursday, deputy chief medical officer Dr Ronan Glynn said there was “no rule that says you cannot be in a room for two hours with somebody else”.

“The two hours relates to the guidance that’s used by the public health doctors in the event a case is confirmed. And they use two hours as a general cutoff point in terms of deciding who is regarded as a close contact.”

Close contacts are generally asked to stay at home and self-isolate for two weeks.

He said many sectors of society would see the necessity for people to be two hours in the same room.

“Whether it’s the Oireachtas or anywhere else, while there isn’t a rule it is good practice to limit the length of meeting times, the number of people in a particular meeting, so that in the event of a confirmed case the impact of that on the business, on the sector, on the Oireachtas, on the Courts Service, is limited to the greatest extent possible.

“All business and all sectors should be trying to limit face-to-face interaction as much as possible. We are still in the phase where we are telling people to stay at home, notwithstanding the restrictions we eased on Monday.”