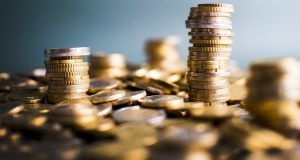 Consumer spending declined by 36 per cent in April. Photograph: iStock

Irish consumer confidence has fallen to an eight-year low as the consumer economy collapsed amid the disruption caused by the coronavirus pandemic, a new survey has found.

Disposable income has slumped by at least 25 per cent and consumer spending has also been hit, showing a 36 per cent decline in April, the latest Consumer Market Monitor from the Marketing Institute of Ireland and UCD Michael Smurfit Graduate Business School showed.

The fall in income came despite employment supports put in place by the Government, and ends a run of 5 per cent growth seen over the past five years.

The study showed consumer confidence was down to -24 in April, a level not seen since 2012.

Clothing and footwear sales were down 50 per cent during March and 90 per cent in April as the lockdown to slow the spread of the virus saw shops shuttered and people remain at home.

However, sales of electrical goods, home furnishings, and food and drink were higher, and the study noted that pent-up demand could boost sales once shops and services are allowed to fully reopen.

Food and drink sales saw particular strength in March as stockpiling of food and essentials was more pronounced, and more people stayed at home to eat. The study said this was expected to continue throughout the year, with growth of about 5-10 per cent expected.

Sales of property and cars fell 90 per cent in April, with the study estimating a total decline of 25 per cent for the year.

Sales of new cars were down 29 per cent in March, with imported used cars down 39 per cent year-on-year, and the decline deepened to 90 per cent in April as pandemic restrictions saw dealers shut down. The survey predicts sales of new and imported cars in 2020 may near the record low of 104,000 of 2009.

A decline of up to 90 per cent during April for the hotel, restaurant and bar sector is unlikely to be recouped over the summer months.

Economic activity is forecast to decline by 8-9 per cent this year, assuming an expected gradual recovery in the third quarter picks up pace in the final three months of the year.

Although this is more severe than the last recession, the level of Government supports for the unemployed is a significant factor that must be taken into account, the survey said.