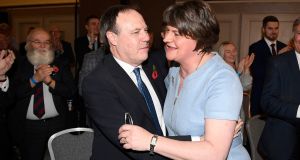 The Ulster Unionist Party (UUP) is to step aside in North Belfast in the UK’s forthcoming general election in a reversal of a pledge by the party’s leader-elect, Steve Aiken, to run a candidate in all 18 of the North’s constituencies.

It follows “abusive and threatening” phone calls which were made to the party’s headquarters on Friday.

In a statement on Sunday, Mr Aiken said the UUP was “a party that believes first and foremost in the Union”, and would not stand in order to give the sitting MP, the DUP’s deputy leader Nigel Dodds, the best chance of holding his seat.

“In the face of Boris Johnson’s terrible deal which forces Northern Ireland towards the edge of the Union,” he said, “we cannot gift a seat to Sinn Féin who support this direction either in North Belfast or Fermanagh and South Tyrone.”

North Belfast is expected to be one of the most closely contested seats in general election in December, with Mr Dodds defending a majority of less than 2,000 against the current Lord Mayor of Belfast, Sinn Féin’s John Finucane.

Mr Finucane said the many unionists in North Belfast who had voted against Brexit should now back him as a Remain MP.

“With the UUP withdrawing from this contest under pressure from loyalist paramilitaries, there is now no unionist candidate representing those who voted to remain in Europe,” he said.

“I pledge that I will stand against the Tory Brexit agenda on behalf of all citizens in north Belfast,” he said.

Mr Aiken said he made the decision following “discussions with senior political and community figures across North Belfast. In doing so we listened respectfully to all views expressed, including deeply held concerns that they will be unrepresented in Westminster in the critical months ahead,” he said.

In an open letter published in the Belfast Telegraph on Thursday, 25 unionists from North Belfast - including current and former members of the UUP - outlined their “strong opposition” to any proposal to split the unionist vote in the constituency.

On Friday, a police investigation was launched after threatening phone calls were made to staff at the UUP headquarters in East Belfast. The News Letter reported that there had been intimidation of potential UUP candidates by loyalist paramilitaries, including the South East Antrim UDA.

Mr Aiken acknowledged the “context of threats and intimidation against Ulster Unionist Party staff and members,” and said that “in a modern democracy, no-one should have to face threats, intimidation or coercion of any sort because of their involvement in the democratic process”.

The threats have been condemned by politicians including Mr Dodds, who said “any such incidents are deplorable and must be totally condemned.

“The only appropriate way to express your views and the most effective way to send a message in our society is through the ballot box,” he said.

On Saturday, the DUP leader, Arlene Foster, said her party would back the UUP’s Tom Elliott as an agreed unionist candidate in Fermanagh South Tyrone.

Mr Elliott said he would not confirm if he plans to stand ahead of a selection meeting this week.