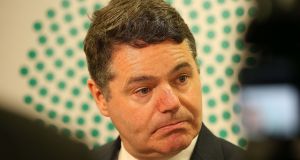 Minister for Finance and Public Expenditure and Reform Paschal Donohoe: “demanding work lies ahead regarding the future trading relationship between the United Kingdom and the European Union”. Photograph: Stephen Collins/Collins Photos

The Brexit deal agreed between the European Union and United Kingdom will not be reopened, Minister for Finance Paschal Donohoe has warned.

The UK was due to leave the EU on Thursday after repeated pledges to do so by British prime minister Boris Johnson but an extension until January 31st was agreed earlier this month. A general election is due to take place in the UK in December.

Labour leader Jeremy Corbyn pledged on Thursday to “get Brexit sorted” in six months and said he would broker a new deal with Brussels and put it to the people in a referendum.

Mr Donohoe warned it would not be possible to reopen the agreed deal.

“The European Union has made clear now that the withdrawal agreement as defined by the recent agreement between the European Council and prime minister Johnson, that is not something that’s going to be reopened. We say that after many, many years now of effort to get to this point.”

He said it was a matter for the British people regarding who they elected.

“But I think it is important to emphasise now that this withdrawal agreement and the changes that have been made in relation to Northern Ireland is after an absolutely exhaustive process to get to this point, and years of negotiation.”

He also warned that a “demanding” phase of negotiations lies ahead.

“The decision by the Taoiseach not to seek a dissolution of this Dáil is driven by the fact that, early in the new year, critical decisions remain to be made regarding the ratification of the withdrawal agreement and then once that is done, even more demanding work lies ahead regarding the future trading relationship between the United Kingdom and the European Union.

“These discussions will also be very, very demanding because of their complexity and we are very clear as we get ready for their instigation next year about what the priorities of Ireland will be,” he said.