Confusion around Public Service Card must be clarified 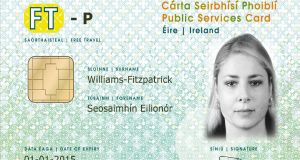 Experts in data protection, legal commentators and the Irish Council of Civil Liberties have expressed concern about the card and the seemingly growing necessity for it to access public services, some essential for people’s everyday lives.

The Public Service Card is not compulsory for all citizens.

It is, however, mandatory for collecting welfare payments, sitting a driver theory test and – soon – for renewing or applying for a passport and a driver licence.

It may also soon be a necessity for other services, including for accessing marriage certificates, or farmers accessing payments from the European Union.

While the concept has been in train for several years, legitimate questions are now being raised about the growing necessity to have the card to access public services.

The initiative was first mooted more than 10 years ago and was accepted formally by the Fine Gael-Labour government in 2013.

The process was slow to progress and it has taken a number of years to roll out. Currently 2.8 million cards are in circulation.

But the case of an elderly woman – denied her pension because of her refusal to sign up for the card – has created a very current crisis for the Government.

The pensioner in her 70s is owed about €13,000 because she refused to register for the card. In another case, a parent whose son has Down syndrome was asked to get the card in order to obtain the State supports she required for her child.

A number of experts in data protection, legal commentators and the Irish Council of Civil Liberties have expressed concern about the rollout of the card and the seemingly growing necessity for it to access public services, some of which are essential for people to go about their everyday lives.

Such a debate took place in the UK over a decade ago when a formal national ID card was proposed by the Labour government under prime minister Tony Blair and later, his successor Gordon Brown. The proposal was eventually scrapped by Theresa May, when she was home secretary, in 2010.

Here, the Social Welfare Consolidation Act 2005 provides for a process to verify the identity of a person accepting a payment from the State – but does not state that any resulting card should be the only acceptable form of identification for accessing public services.

The fact that the Public Services Card does not, therefore, have a clear legislative basis means it may be exposed to significant challenges.

Many of the concerns raised are legitimate. Solicitor Simon McGarr has been one of the most vocal opponents to the imposition of the card. He believes a national ID card is being imposed by stealth and the consequences have not yet been fully explored.

The card itself displays a photograph of the owner, their PPS number and signature, the number of the card and the expiry date.

Encoded in the card – but not written on it – are their date of birth, their sex, their mother’s maiden name, any previous surname they have held, their nationality and their place of birth.

Registration generally involves examining documents to prove a person’s identity and address, background database checks, a face-to-face interview and matching their facial image with their photograph.

The Department of Social Protection has moved to ease the concerns of people, insisting it is neither compulsory nor mandatory to carry the card, and insists there will be no law allowing gardaí to force you to produce it as ID.

Despite their efforts, the confusion and the concern surrounding this policy remains. This should not just fall to Minister for Social Protection Regina Doherty to clarify. Taoiseach Leo Varadkar and Minister for Public Expenditure Paschal Donohoe also have questions to answer.