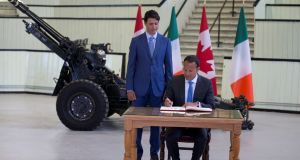 Leo Varadkar was speaking after he met with Canada’s prime minister Justin Trudeau in Montreal on Sunday. Photograph: Christinne Muschi/Reuters

A British government suggestion that the future of the Border cannot be settled until the shape of Britain’s post-Brexit trading relationship with the EU emerges has been described as “common sense” by Taoiseach Leo Varadkar.

Mr Varadkar made his comments after UK Brexit secretary David Davis sought to tie the issue of the Border to the EU’s future customs arrangement with Britain.

“It is simply not possible to reach a near-final agreement on the Border issue until we’ve begun to talk about how our broader future customs arrangement will work,” Mr Davis wrote in the Sunday Times.

Speaking in Montreal after a meeting with Canadian prime minister Justin Trudeau, Mr Varadkar said: “I think the suggestion that David Davis has made, to a certain extent, is common sense. If we were able to have a trade agreement between the EU and UK then of course it will be much easier to sort out issues around any Border between Ireland and Northern Ireland.”

However, the Taoiseach said he differed from Mr Davis on the fact that the EU and UK already have a trade agreement in the shape of the customs union and single market. “It seems to me that we already have two very good trade agreements in place and I’m not sure what they have in mind as a better one to replace it,” he added.

Against the agreed position

Mr Varadkar declined to say whether he disagreed with Mr Davis’s suggestion that the trade talks should take place alongside British withdrawal arrangements, which would be against the agreed EU position. He said the EU is “not at a point to make that decision yet”.

“That decision will be made by the European Council, when we meet in October,” he added.

Meanwhile, Fine Gael MEP Maireád McGuinness has said the forthcoming treaty between Britain and the European Union would shape Ireland’s future as much as the Anglo-Irish Treaty of 1921 signed by Michael Collins.

Ms McGuinness, a vice-president of the European Parliament, told the 95th annual Béal na Bláth commemoration in west Cork that Ireland remained “in the dark” about the shape of the new treaty but no one should underestimate its importance.

“Our relationship with the UK will be more radically changed by Brexit than it was by the Easter Rising, the War of Independence, the Anglo-Irish Treaty or the Declaration of the Republic in 1949,” Ms McGuinness told an attendance of several hundred.

When he was shot dead in an ambush by Anti-Treaty forces at Béal na Bláth during the Civil War on August 22nd, 1922, Michael Collins died trying to convince people that what had been achieved under the Treaty was “a stepping stone to the achievement of the dream of nationhood”, Ms McGuinness remarked.

But there were those today who sought to use Brexit as “a weapon to re-unite our country” but such an approach was “misguided” as the path to re-unification was already set out in the Good Friday Agreement, voted for by people North and South.

“Our challenge is to be as brave as Collins was, to embrace and give ourselves fully to the commitments that we have signed up to. We cannot and do not turn our backs on the UK as our near neighbours and trading partners.”