Climate crisis: ‘Changes on way’ for everyone, warns Minister 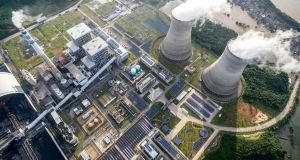 Ireland remains 70% dependent on oil and gas, which the Government hopes to get to 30% by 2030. File photograph: Getty

“Everyone will have to make changes,” warned Minister for Climate Action Richard Bruton as the Dáil agreed to declare a climate and biodiversity emergency, making Ireland the second country worldwide to do so after the UK.

There were sharp differences over issues such as who should pay carbon tax. And Mr Bruton said “there is a danger that people will want something for which someone else will pay”, rather than the group for whom they speak.

His remarks came as the Green Party called on Taoiseach Leo Varadkar to convene an emergency Cabinet meeting on climate change. This follows the Dáil decision, agreed without a vote, when just six TDs were present.

Fianna Fáil climate-action spokesman Timmy Dooley introduced an amendment to declare an emergency but it was accepted at the end of the debate when just six TDs were in the chamber, none from Fianna Fáil.

The Dáil accepted the recommendations of the report with the added Fianna Fáil amendment to declare a climate and biodiversity emergency.

Green Party leader Eamon Ryan said the Government needed to push through key measures already before the Dáil and “to start preparing for proper investment in nature protection and retrofitting”.

The Cabinet meeting should act on issues including an end to drilling for fossil fuels and an end to peat extraction, supports for sustainable transport with spending on a two-to-one basis in favour of public transport over new roads and an end to single-use plastics.

Mr Ryan said it was a “national disgrace” that “our main political parties have an appalling track record on climate action both here and in Brussels” and it was time for action.

But the Minister warned that “everyone must make these changes. That is a difficulty in dealing with this issue.”

Mr Bruton said everyone would have to consider how they heat their homes, to move away from fossil fuels and how they managed their travel – “the amount of travelling we do, the mode of transport we use and the types of fuels we use. That will be a profound change involving an increase in the cost of travel and for some people it will come very hard.”

He added: “We must accept that there will be more wind farms and more associated interconnectors and infrastructure being built in or close to people’s backyards. None of those things will come easy.”

Mr Bruton has confirmed he will bring forward proposals by the end of the month.

But he has ruled out the immediate banning of fossil fuel exploration because Ireland remains 70 per cent dependent on oil and gas, which the Government hopes to get to 30 per cent by 2030.

People Before Profit TD Bríd Smith said that for the declaration to mean anything the Government had to act like there is an emergency and back her Climate Emergency Measures Bill which will ban fossil fuel exploration. The Bill has been delayed within the Oireachtas system but goes to committee on June 11th.

Ms Smith said Governments continued support for the fossil fuel industry and exploration despite everything that was known about climate change. “We know we must leave 80 per cent of proved reserves of oil, gas and coal in the ground to stay within the limits of the Paris treaty.”

Mr Dooley said during the debate that “declaring an emergency does not paint the full picture. He claimed the “State is very far from being a leader. It is on life support” on this issue.

The Clare TD pointed to the report’s focus on a “just transition and for those most exposed and most in need of assistance to be put first. The social consequences of climate action should be tackled first and not treated as an afterthought.”

Chairwoman of the climate action committee Hildegarde Naughton highlighted elements of the report that call for fresh legislation with ambitious renewable electricity targets with zero emissions by 2050 and five-year carbon budgets.

The report also recommends that responsibility for climate action be centrally co-ordinated by the Department of the Taoiseach and a new permanent committee to “ensure adequate oversight and accountability”, of Ministers and public officials for climate action.