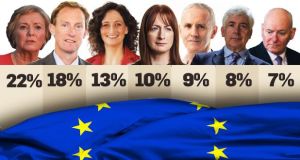 In Dublin, Fine Gael’s Frances Fitzgerald is on course to top the poll at 22%, followed by Fianna Fáil’s Barry Andrews on 18%.

Fine Gael candidates are on track to top the poll in all three European Parliament constituencies, according to a special Irish Times/Ipsos MRBI opinion poll taken with sample ballot papers earlier this week.

Fianna Fáil will also challenge strongly to elect MEPs in each of the constituencies, while Sinn Féin’s three MEPs will see their vote decline substantially but remain in the running to retain their seats.

The poll indicates that other left-wing candidates are likely to end up competing with each for the remaining seats, though Luke Ming Flanagan in Midlands North West is likely to poll strongly and be returned.

Peter Casey, the Independent candidate who came second in the presidential election last year, received 9 per cent of first preference votes and could yet be in the hunt for a seat. But the odds are stacked against him.

The poll was conducted on Tuesday, Wednesday and Thursday of this week among 500 voters in each of the three European parliament constituencies using a sample ballot paper, a total of 1,500 voters across 150 sampling points in all constituencies. The accuracy is estimated at plus or minus 4.4 per cent at the European constituency level.

In Dublin, Fine Gael’s Frances Fitzgerald is on course to top the poll at 22 per cent, followed by Fianna Fáil’s Barry Andrews on 18 per cent. Four candidates are likely to fight it out for the last two seats – Sinn Féin MEP Lynn Boylan (13 per cent), Independents 4 Change TD Clare Daly (10 per cent), Ciarán Cuffe of the Green Party (9 per cent) and Labour’s Alex White, who is on 8 per cent.

Fine Gael are also set to top the poll in Midlands North West, where sitting MEP Mairead McGuinness is set to be a runaway poll topper on 26 per cent, according to today’s numbers. Mr Flanagan is on 16 per cent while Sinn Féin MEP Matt Carthy is on 14 per cent.

This constituency is a weak spot for Fianna Fail, with neither of its two candidates, Brendan Smith (8 per cent) or Anne Rabbitte (5 per cent) making a sufficient impression with voters at this stage.

In pursuit of that quota

However, previous polling trends have shown strong Fianna Fáil support in these counties. And it would be a surprise if the party cannot muster a quota between the two candidates.

In the South constituency, where five MEPs will be elected, Fine Gael MEP Seán Kelly leads the pack at 18 per cent – enough to have him elected on the first count were it to be repeated on polling day. Sinn Féin MEP Liadh Ní Riada is also set to return to the European Parliament if she repeats the 14 per cent she registers in today’s poll.

Fianna Fáil’s Billy Kelleher is on 13 per cent while his running mate Malcolm Byrne is at 10 per cent. There is likely to be one Fianna Fáil seat here based on these levels of support.

Fine Gael has sufficient support in the constituency for two seats, though with Deirdre Clune on 10 per cent and Andrew Doyle on 9 per cent, there is no clarity as to who might take it.

Independents 4 Change TD Mick Wallace, who is on 8 per cent, leads Labour’s Sheila Nunan and the Greens’ Grace O’Sullivan (both on 5 per cent) in the race for the final seat.

Today’s poll reflects the state of play with the crucial final fortnight of campaigning yet to come. With public attention only beginning to focus on the May 24th elections, name recognition is clearly a big advantage at this stage.