Charlie Flanagan: Brexit is a mess with no upside for Ireland

Minister for Foreign Affairs Charlie Flanagan speaks about the possibility of a hard border existing between Northern Ireland and the Republic of Ireland during an interview on the BBC's Hardtalk programme. Video: BBC 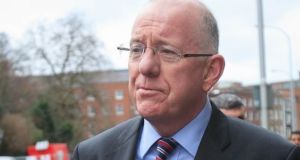 Minister for Foreign Affairs Charlie Flanagan has said Brexit is a “proper mess” and he sees no “upside” to it for Ireland.

In an interview on the BBC’s Hardtalk programme, he described Brexit as one of the greatest challenges facing Ireland since the independence of the State.

Mr Flanagan said although Brexit had people thinking about a united Ireland, it was neither “timely” nor “appropriate” for a border poll to be held. But he did concede it could make the long-term prospect of a united Ireland more likely.

Mr Flanagan is attending a meeting of the European People’s Party in Co Wicklow later today where former British prime minister Tony Blair is expected to make a speech on Brexit.

On Thursday the EU’s chief Brexit negotiator Michel Barnier told the Government that his door is open for ideas about how to manage the Border after Brexit, when the 500km boundary becomes the frontier between the EU and the UK.

Mr Barnier will on Friday travel to the EPP conference in Druids Glen. He will later visit the Border region where he will meet farmers and food industry workers in the Lough Egish business park in Co Monaghan.

Former British prime minister Tony Blair on Friday morning said the British public could change their minds on Brexit when they see the actual terms of the deal. He added that it would be a “disaster” for Ireland to have a hard Border.

Meanwhile, a former senior diplomat has said there is no such thing as a “soft border” and that there will be a border with installations between the Republic and the North.

Commenting on Mr Barnier’s Dáil speech, Ray Bassett said that over time that border is likely to harden rather than soften and will cause problems for both governments with an increase in smuggling and criminality.

“To be quite honest, in the EU there isn’t really such a thing as a soft border. We’re using euphemisms there, that we will have a border in Ireland, we will have installations on it. Over time that border is likely to harden rather than soften,” he told Newstalk.