Over to you, Michel Barnier tells Ireland 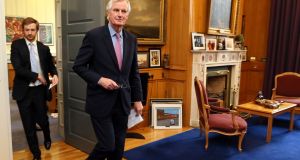 Michel Barnier arrives for a meeting with Taoiseach Enda Kenny at Government Buildings: his message was that Ireland had the goodwill of the EU and its determination to make the best deal for this country. Photograph: Paul Faith/WPA Pool/Getty

That was the message that the EU’s chief Brexit negotiator Michel Barnier had for the Irish Government during his visit to Dublin on Thursday. The Brexit task force he commands is inviting proposals from Dublin on how to alleviate the impact of Brexit on the island once the Border becomes the frontier between the UK and the EU in two years.

Barnier’s visit was warmly welcomed by most politicians in Leinster House, and there were fine words of mutual respect and shared interests from both sides. The Ceann Comhairle and others (even Gerry Adams) tried out their French and Mr Barnier essayed a few words of Irish. Predictably, Solidarity and people Before Profit TDs railed against the neo-liberal EU, its commitment to the millionaires, not the millions.

Then Barnier retreated behind closed doors for meetings with the Taoiseach and Ministers, where he stressed that his door was open for suggested solutions to the problems looming on both sides of the Border. In fact, his officials are positively soliciting them.

The term used in the official communications is “flexible and imaginative solutions”. Irish officials have been working on what some of these solutions might be, and there is a series of possible proposals that will be worked on and presented to Brussels over the coming months. Their content will not be made public.

“It will be a slow and frustratingly below the radar exercise for a while at least,” said one senior Irish source yesterday.

The fact of the British general election, and the lack of a northern executive, are compounding the difficulty.

So we are a long way from complete answers to the problems presented by a new Border, however hard it may turn out to be. For a start, a crucial question is what the status of EU-UK trade in the future will be – will it be a zero-tariff, free-trade deal wrapped into some sort of association with the customs union? Or will it be a much more restrictive arrangement that involves tariffs on goods travelling between the EU and the UK?

These questions will not be answered until much later in the talks. The EU has consistently said that it will not discuss future trade relations until substantial progress has been made on its three opening priorities, of which Ireland is one.

If the two sides can make progress on the other two priorities – citizens rights and the EU’s Brexit bill – then trade, and Ireland’s Border, will likely be discussed in the first half of next year. That’s a lot of ifs, but that’s as good as it gets for now.

In public, the message from Barnier was that Ireland had the goodwill of the EU and its determination to make the best deal for this country. That’s exactly what the UK says, too.

How much all that will count for when the final deal is struck remains to be seen. It’s as good a starting point as could reasonably be expected. But it’s no guarantee of a sunny outcome.

As senior figures in both Dublin and Brussels make clear, there are no good outcomes from Brexit – only some that are less bad than others.