The EU's chief Brexit negotiator, Michel Barnier, addresses the Houses of the Oireachtas 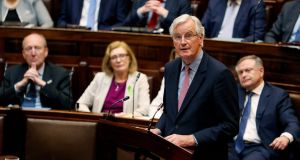 Michel Barnier, the EU’s chief Brexit negotiator, has told the Government that his door is open for ideas about how to manage the Border after Brexit, when the 500km boundary becomes the frontier between the EU and the UK.

However, no concrete plans for the Border will be possible until the future EU-UK trade relationship is clear, and that will not come until much later in the talks, probably towards the middle of next year. EU sources said that Irish initiatives would be welcomed and form an important part of the future negotiations with the UK.

During a series of engagements in Dublin yesterday, including an address to a joint sitting of the Dáil and Seanad, Mr Barnier stressed that Ireland’s concerns were the EU’s priorities in the forthcoming negotiations with the UK on Brexit. Mr Barnier also had meetings with political leaders in Leinster House.

Mr Barnier’s speech was warmly received by most TDs and Senators in Leinster House, though he was criticised by TDs from Solidarity and People Before Profit.

Both Mr Barnier and the Taoiseach stressed that one of the highest priorities in the Brexit negotiations was to protect the Northern Ireland peace process. Earlier, Mr Kenny told a meeting of the European People’s Party in Druids Glen, Co Wicklow that the Border had been associated with sectarianism and “30 years of violence”.

Later, meeting privately with the Taoiseach and then with senior Ministers and officials, Mr Barnier indicated that he wanted to hear Irish ideas about how the impact of the UK’s departure could be eased in Border areas.

However, it is understood that the British election and the continuing absence of an executive in Northern Ireland are hampering the development of proposals to soften the imposition of any border. EU officials have also expressed concerns to the Irish Government that London is not sufficiently engaged in the process.

Today Mr Barnier will travel to the EPP conference in Druids Glen, where delegates will also hear from the former British prime minister Tony Blair. He will later visit the Border region where he will meet farmers and food industry workers in the Lough Egish business park in Co Monaghan.

Go with the grain: Unbeatable rice recipes, from pilafs to puddings