Comptroller sorry for error that led to Garda commissioner criticism 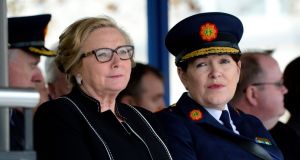 The Comptroller and Auditor General has apologised to Nóirín O’Sullivan over an error which led to the Garda Commissioner being accused of misleading a Dáil committee.

Public Accounts Committee chairman Seán Fleming (Fianna Fáil) on Thursday criticised Ms O’Sullivan after a paragraph acknowledging an internal audit into financial irregularities at the Garda college in Templemore was included in the accounts six months after they were signed.

He said this was dishonest and an attempt by the commissioner to mislead.

The comptroller, Seamus McCarthy, said he had asked the Garda to make reference to the concerns at Templemore college in the signed accounts. Mr McCarthy insisted he did not ask Ms O’Sullivan to re-sign the documents.

He later clarified the record of the committee confirming Ms O’Sullivan signed the revised accounts after making alterations to its contents.

Mr McCarthy apologised for the inaccuracy and told the committee Ms O’Sullivan signed the revised financial accounts on September 16th, 2016.

“I should have picked up on this and I apologise for that oversight.The circumstances were exceptional. We will of course be reviewing our finalisation process for appropriation account audits.”

Mr Fleming later said he had made “erroneous” remarks on the back of the comptroller’s information which “ I relied on in good faith”.

“The statement by the C&AG corrects the issue in relation to the actual date that should have been on this document,” he said.

“I fully accept that any implications drawn regarding these were erroneous and that there was no attempt by the Garda Commissioner to mislead the committee or public in relation to this matter. I welcome the correction by the C&AG and regret any misunderstanding caused.”

The committee is looking into an internal Garda audit that was carried out at the college amid financial concerns. The resulting report found financial irregularities and evidence that money was being spent on gifts and entertainment. It also confirmed a large number of bank accounts including one for laundry, which was not being used for that purpose.

Earlier, Minister for Justice Frances Fitzgerald said she would not hesitate to take “any action required” when the committee reports on the financial irregularities at Templemore.

The Minister came under renewed Opposition pressure in the Dáil on Thursday to remove Ms O’Sullivan from her post.

Ms Fitzgerald said some people wanted the examination of the issues involved to proceed, but to reach conclusions before they were completed.

She added some people wanted to reach verdicts before all the evidence had been heard.

“What I cannot do is a have a running commentary on these proceedings,’’ she said. “There is a process in place and we need to get to the end of that process.’’

She said she would pay very careful attention to the proceedings of the committee.

Fianna Fáil justice spokesman Jim O’Callaghan said his party did not want a running commentary. “We want political responsibility in respect of this matter,’’ she added.

Sinn Féin deputy leader Mary Lou McDonald, a member of the Public Accounts Committee, said the Minister was failing to hold the commissioner to account.

The committee, she said, had already established facts such as the existence of 50 bank accounts opened, illegal leasing of land and the commissioner’s failure to advise the Minister on the “shenanigans’’ in the college.

Labour leader Brendan Howlin said the leadership of An Garda Síochána was “staggering from one emergency to another’’.