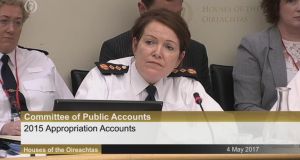 This is based on two reports prepared by Barry McGee in 2008 and Assistant Commissioner Jack Nolan in 2010.

Mr Barrett writes to Cyril Dunne, the then chief administrative officer, outlining his concern that substantial and material matters have remained unresolved and that standards have been compromised.

Head of legal affairs in the Garda Ken Ruane wrote to the Garda Commissioner saying she must inform the Minister for Justice about the concerns.

He makes reference to Section 41 of the Garda Act, which legally obliged the commissioner to inform the Minister.

A meeting takes place between the Commissioner and Mr Barrett. She says it was a brief exchange over a cup of tea.

He says it was a two-hour meeting where issues were discussed at length and he was warned to be careful when pursuing a line of questioning.

The Commissioner establishes a steering group to examine all issues and bank accounts begin to close.

She says Department of Justice officials were appointed to this working group.

Department of Justice officials are asked to participate in steering group.

Officials write to the Garda insisting the internal audit unit are made aware of difficulties.

The Garda internal audit unit is appointed to examine all the issues involved but neither the 2008 nor the 2010 reports are given to the audit committee.

The Garda Commissioner informs the Tánaiste of irregularities.

Mr Barrett meets the chairman of the audit committee of the Garda, Michael Howard.

The Garda Commissioner meets Mr Howard on an unknown date this month.

Interim report by Niall Kelly, head of internal audit, is released his outlining the scale of the problem.

The Policing Authority is informed of the financial mismanagement.