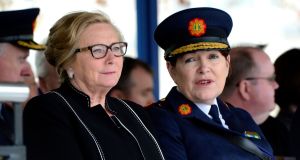 The crisis engulfing Garda Commissioner Nóirín O’Sullivan deepened yesterday when it emerged that she delayed informing the Garda’s internal audit unit of financial irregularities at the Templemore Garda College after being instructed to do so by the Department of Justice.

In addition, the political fallout for Minister for Justice Frances Fitzgerald intensified when it emerged that Fianna Fáil will not facilitate her reappointment when a new government is formed.

Fresh questions were raised about Ms O’Sullivan’s handling of the controversy about the mismanagement of funds at Templemore after an appearance at the at the Dáil Public Accounts Committee (PAC) by the Department of Justice.

Ms O’Sullivan has insisted she acted promptly after learning of the practices at the college, establishing a working group in July 2015 to examine the claims.

When the department became aware of the issues, it wrote to An Garda Síochána on October 6th telling it of the urgent requirement to inform its internal audit unit of the issues.

However, Ms O’Sullivan did not notify Niall Kelly, head of the internal audit unit, until March 2016 – five months later.

The Garda Commissioner has come in for strong criticism for her handling of allegations of financial irregularities at the college.

It has emerged in recent days that Ms Fitzgerald was not informed by the commissioner of the concerns regarding mismanagement of money in Templemore until October 2016.

This is despite the head of legal affairs in the Garda, Ken Ruane, informing Ms O’Sullivan of her legal obligation to inform the Minister in July 2015.

The PAC is to consider inviting former Garda commissioners before them to give evidence of their knowledge of the financial practices at Templemore.

Labour TD Alan Kelly and Fianna Fáil TD Marc MacSharry urged the committee to consider hearing from those who held office in 2008 and 2010 when audits were carried out into Templemore.

Meanwhile, The Irish Times understands that Fianna Fáil will not facilitate the reappointment of Ms Fitzgerald as Minister for Justice when a new government is formed after the expected departure of Taoiseach Enda Kenny.

Senior party sources confirmed last night that the continuing Garda controversies, and Ms Fitzgerald’s determination to stand by the embattled Garda Commissioner meant Fianna Fáil would not consent to her reappointment.

The move to block the reappointment of Ms Fitzgerald signals the strains the confidence and supply agreement between Fianna Fáil and Fine Gael will come under when a new Fine Gael leader – expected to be elected in the coming weeks when Mr Kenny steps down – takes over.

Dáil numbers mean that Fianna Fáil must abstain for a new government to be approved by the Dáil.