The Palestinian flag has been flying over Dublin’s City Hall 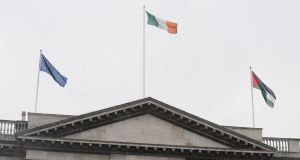 The Palestinian Flag flies over Dublin City Hall along side the tricolour and the flag of the European Union. Photograph: Aidan Crawley

A Palestinian flag has been flying from the roof of Dublin’s City Hall on Dame Street since Tuesday.

However the decision has drawn criticism from the Israeli ambassador and former Minister for Justice Alan Shatter.

Mr Shatter said the move will do profound damage to the reputation of “our capital city and our country”.

In a letter to Dublin city mayor Brendan Carr, Mr Shatter said as an Irish citizen born in Dublin and as a member of the Jewish community he wanted to express his “sadness” at the “superficial and offensive approach taken by the Council at its meeting to the complexities of the long-enduring and tragic conflict between Israelis and Palestinians”.

“The flying of the Palestinian flag by Dublin City Council will do profound damage to the reputation of our capital city and our country. Should further atrocities be perpetrated on Israelis in the coming days and weeks, there is considerable risk that Dublin City Council will be internationally perceived to be supportive of terrorist acts,” he wrote.

“It will also undermine any remaining prospect of this State being viewed as having any meaningful role to play in the achievement of the two-state solution we have endorsed as members of the EU, in international forums and in engagements with both Israeli and Palestinian leaders.”

Mr Shatter, himself a lawyer, asserted that the council was not “legally or constitutionally entitled to choose the national flag of any other state or political entity or movement and fly it at will for a number of weeks as representative of the capital city of the Irish Republic. Could you please revert to me identifying the council’s legal competence for its action?”

He added: “I believe such gesture politics can play no meaningful role in the resolution of the Israeli/ Palestinian conflict and that the council’s adoption of the Palestinian flag and decision to fly the flag at City Hall is ultra vires [BEYOND]the legal competence of the council.”

People Before Profit councillor John Lyons proposed the motion to mark 50 years of Israeli occupation in the West Bank and to show the support of the international community for the Palestinian people.

In a letter to city councillors ahead of their decision to fly the flag, Israeli ambassador Ze’ev Boker said flying the flag would be “highly politically charged” and demonstrate a one-sided approach by the council to the conflict.