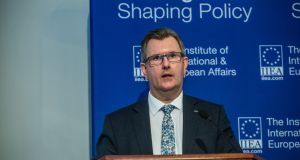 The head of the body which represents the manufacturing sector in Northern Ireland has said he “remains to be convinced” that British prime minister Boris Johnson, can deliver on his promise of “unfettered access” for goods moving from Britain to Northern Ireland as well as from the North to GB post-Brexit.

Stephen Kelly, of Manufacturing NI, said the entire political, business and trade community in Northern Ireland “remains puzzled by the suggestion that they can deliver what is clearly not deliverable at this point”.

He was responding to a statement by Mr Johnson in the House of Commons on Wednesday, who said “emphatically” his commitment to unfettered access would apply both east-west and west-east.

“Both he and his Chancellor of the Exchequer have said there will not be any alignment, any customs agreement or any single market participation from the UK in a new trade deal, so there are direct contradictions between the stated position of government policy and the prime minister’s words,” said Mr Kelly.

“We, like many others, remain to be convinced that he can deliver what he is so emphatically suggesting that he will deliver.”

Under the terms of the withdrawal agreement, Northern Ireland will remain part of the UK customs union but it will be subject to EU customs rules and the oversight of EU authorities. It will also maintain regulatory alignment with the EU, avoiding a hard border on the island of Ireland but creating a regulatory border in the Irish Sea.

Mr Kelly said that “the business community and indeed the political community in Northern Ireland are now as one”, and the UK needed to “step up” and legislate for Northern Ireland’s position within the UK marketplace.

He also said Mr Johnson needed to “set out in very clear terms how his negotiating ambitions this year can deliver that unfettered access he’s so emphatically suggesting will be achieved by the end of the year”.

Mr Johnson was responding to a question from the DUP’s MP Sir Jeffrey Donaldson, who said during Prime Minister’s Questions that, as the UK’s departure from the EU approaches, “the prime minister will be aware of concerns in Northern Ireland, and we welcome his assurance that there will continue to be unfettered access for Northern Ireland businesses to the UK single market.

“We welcome the prime minister’s very clear words today but the challenge is for those words to be put into action,” he said.

“It is incumbent upon them to ensure that the commitments are now delivered upon.”

“It takes two to tango with this ... the EU also have a big say in this and our concern is that the EU will look at the likes of Belfast port and put it in the same category as Calais or Zebrugge.

“It’s entering the frontier [of the EU]and we have to be realistic,” he said. “Because Northern Ireland will have access to the single market there will have to be something. We know that. We just want it to be as efficient as possible and to create as little friction as possible.”

At the moment, he said, there were “a lot of unknowns out there . . . unfortunately a lot of businesses they still don’t know what to do or how to prepare or what to invest in”.