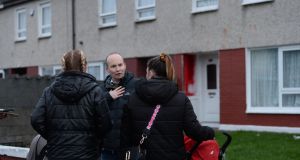 The general election represented an opportunity for an “earthquake moment” to create an alternative government without Fianna Fail and Fine Gael, according to People Before Profit TD Richard Boyd Barrett.

He said “it is clear that the message of leaving behind the failed past of Fine Gael and Fianna Fail is resonating loudly as the campaign progresses with now a majority of people looking for alternative to the two major parties and demanding a different future”.

He said “that would raise the prospect and raise people’s hopes that actually there is a chance here for us to radically break the cycle of Fianna Fail and Fine Gael and make a really historic change”.

Speaking before Mr Murphy’s call for Sinn Féin to rule out backing either Fine Gael or Fianna Fáil leader as taoiseach, Mr Doherty said however that “we will only be in government if we can agree with any individual or smaller party or larger party a programme for government that puts ordinary people and families at the centre”.

Sinn Féin is the third largest party in the Dáil after Fine Gael and Fianna Fail.

Referring to The Irish Times Ipsos/MRBI poll which showed a majority of people want either change or radical change, Mr Boyd Barrett said “this could be and earthquake moment in Irish political history, the political equivalent of the repeal moment and we would urge voters to come out and vote in the largest numbers possible and grab this historic opportunity for change with both hands.”

People Before Profit is running 27 candidates, there are nine Solidarity candidates and Mr Murphy, the sole Rise candidate.

They were speaking at the launch of the party’s manifesto which aims to make housing a human right, build 100,000 public and affordable houses and ensure real rent controls.

The party is campaigning for a return to a State pension age of 65 with an increase in the pension to €260 from the current €248.30. It also promises 33 hours of free-childcare a week with a cap on fees of 3 per cent of earnings and a move to free childcare through the National Childcare Service.

The party aims to introduce a €15 an hour living wage and to end the USC for anyone earning €90,000 or less while imposing a high income charge for those earning more.

The party would work to end the property tax on family homes, propose a publicly-owned insurance company to cut costs.